Electronic Navigational Charts: An Update and Some Issues 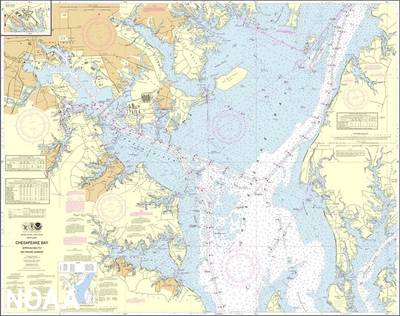 In November 2019, the Office of Coast Survey (OCS), part of the National Oceanic and Atmospheric Administration (NOAA), announced the start of a five-year program to “sunset” all raster and paper nautical charts.

NOAA has produced electronic navigational charts (ENCs) since 1993. In the 2019 notice, NOAA writes that “ENC sales increased 425% since 2008, while sales of paper charts are now half of 2008 levels.”

For NOAA and mariners, a focus on electronic charts and publications promises many advantages. With a singular focus, NOAA can use its resources more efficiently. Mariners will get higher quality, more informative charts, eventually building to a library with over 9,000 ENCs.

And importantly, paper charts will still be available via a new NOAA web-based Custom Chart application. Users can define scale and paper size and selected positioning. Notes and other marginalia appear on separate PDF pages. The app is now available as Version 1 and, even better, development is ongoing and two-way: via NOAA’s web page a user can comment on the app’s good points and ideas for improvement.

The huge increases in demand for ENCs surely indicate support among users. That doesn’t mean, though, that there are no questions with the sunsetting project. In a heavily regulated industry, one basic concern for mariners is, yes, NOAA makes the charts, but the U.S. Coast Guard (USCG) makes the rules. Is the Coast Guard on board with NOAA’s e-chart initiative?

To a large extent, yes. In May 2020, the USCG issued a Navigation and Vessel Inspection Circular (NVIC, No. 01-16 (CH-2)) updating its “use of electronic charts and publications in lieu of paper charts, maps and publications.”

The NVIC states that, because of technology advancements, “the Coast Guard now considers most electronic devices to be capable of meeting the ‘ready reference’ timeframe by which a ready-reference paper version on board a vessel would be available.” The NVIC states further that “the Coast Guard sees no significant safety barriers preventing vessels from accessing voyage planning navigational information via the internet on an as-needed basis, versus keeping a publication or extract on board.” The USCG writes of “encouraging the use of electronic voyage planning products.” 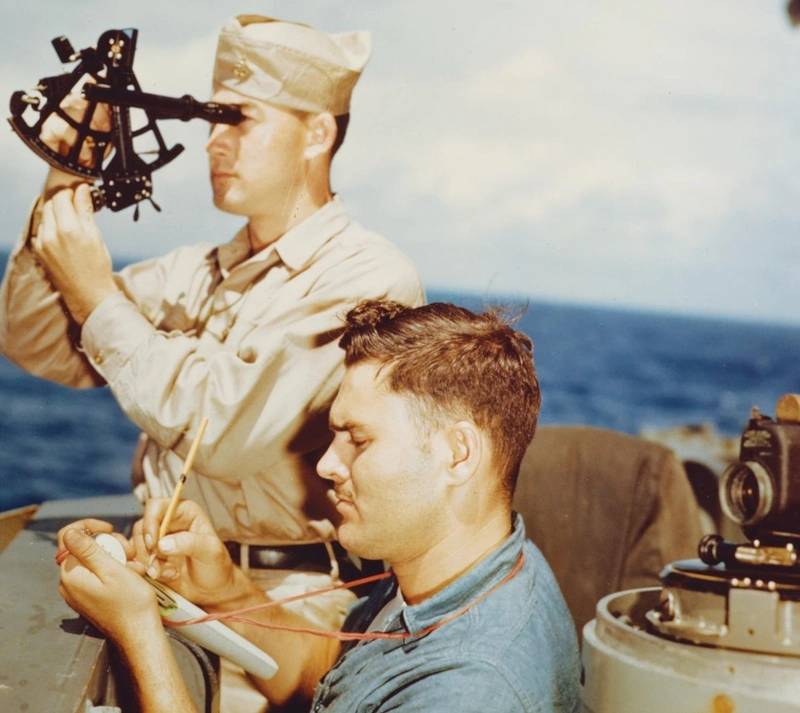 A quartermaster takes a sun sighting from the navigation bridge of the USS Alaska (CB-1) in 1945. (U.S. NAVAL INSTITUTE PHOTO ARCHIVE. Used with permission.)

Since 2019, the sunsetting process has made significant strides across a number of fronts. In April and May the Agency held two webinars to explain and update the e-chart process. Earlier, in February, it announced the end of work on its first paper chart, for Lake Tahoe, paper chart 18665. That means that starting in August, an electronic navigational chart will be the only NOAA nautical chart of the area. The notification about Lake Tahoe was included in the USCG’s Local Notice to Mariners (LNM). Going forward, that’s the venue that will be used for future end-of-paper announcements.

NOAA does not have a specific schedule or set of criteria for how it will progress with the sunset. Rather, changes will proceed when certain conditions develop. These include:

NOAA’s transition plan was to incorporate stakeholder comments and concerns which would help guide the sunsetting process. What did people say to NOAA? That’s hard to tell directly because NOAA did not make this a public docket.

“We wanted responders to be candid and forthright with their feedback and posting them publicly would discourage that,” explained Julia Powell, Chief of the Navigation Services Division, Office of Coast Survey.

NOAA received more than 430 comments, Powell said. About 70% were from recreational boaters, 20% from professional mariners, and the remaining from other sources, such as maritime educational institutions and other government agencies. Over half of the comments supported the continuation of paper charts, especially as backup for e-charts. Powell added that there were “several comments” conveying “satisfaction with the use of NOAA ENCs and the advantages of focusing efforts on improving this digital chart product.”

Regarding the many references to keeping paper charts, Powell emphasized that the e-chart move still makes paper charts accessible via the new NOAA Custom Chart app. Overall, the project is on schedule. “We fully expect to complete the process of canceling all traditional paper and raster nautical chart products by Jan 2025,” Powell said.

With no access to public comments, it’s hard to assess industry’s top concerns and suggestions and whether that information is influencing implementation.  As with all big projects, there are outstanding issues and unanswered questions. Maybe the biggest question: is the USCG a participant in the sunsetting project, or standing by as an observer? Yes, NVIC 01-16 is a critical document. But it wasn’t issued as part of NOAA’s sunsetting.

During NOAA’s recent webinars, questions came up about NOAA and USCG teamwork. One participant asked, for example, about USCG-approved custom POD (print on demand) charts. NOAA’s reply: “That is a good question for which we don't have an answer. We are looking into what it would take to make a carriage compliant, NOAA custom chart.” Another person asked about petroleum transport and charting. NOAA’s reply was a general reference to NVIC 01-16.

NOAA added that the Coast Guard is “presently working on preliminary steps that will result in new regulations related to the use of electronic navigational charts,” likely ready in about a year. In response to a question about the Light List NOAA mentioned a NOAA-CG effort at “harmonization,” underway now, pertaining to updated waterway references. NOAA’s 2019 Sunsetting document tells that NOAA and the Coast Guard are “currently discussing if and what paper chart carriage the USCG may have in the future.” Those discussions are ongoing.

After one question NOAA staff remarked that the webinar attendee list included several participants from the Coast Guard. Hopefully, NOAA’s staff commented, “they will take note of (the) question.”

With a new program, nobody expects all the answers at start up. But regulated businesses, facing inspection and enforcement, want to avoid policy zigs and zags and conflicting timelines. In fact, e-chart development seems active on a number of fronts – “harmonization,” new carriage allowances – not just the sunsetting process. People expect interagency teamwork.

In 2020, the American Waterways Operators, sent comments to NOAA on sunsetting.

AWO suggested that NOAA “strategically sequence” the transition from paper to ENC products “for those (companies) that need or choose to use them to meet US Coast Guard navigation carriage requirements.”

Another suggestion was retaining the option to purchase traditional paper charts “until the Custom Chart application is fully tested, functional and operational.”

A third major concern is more complicated. AWO notes that some of its members would prefer ENCs. However, AWO writes, “current Coast Guard policy regarding chart carriage requirements effectively prevents them from doing so. We would like to bring these issues to your attention and ask for NOAA’s support to resolve them.”

At issue is text within the CG’s NVIC 01-16 directing that, “If any part of the vessel’s intended voyage is seaward of the territorial sea baseline (as defined by 33 CFR 2.20), then the display system must be tested against and meet the International Electrotechnical Committee’s Maritime Navigation and Radiocommunication Equipment and Systems Standard (IEC 60945) or be a Radio Technical Commission for Maritime Services Electronic Chart System.” 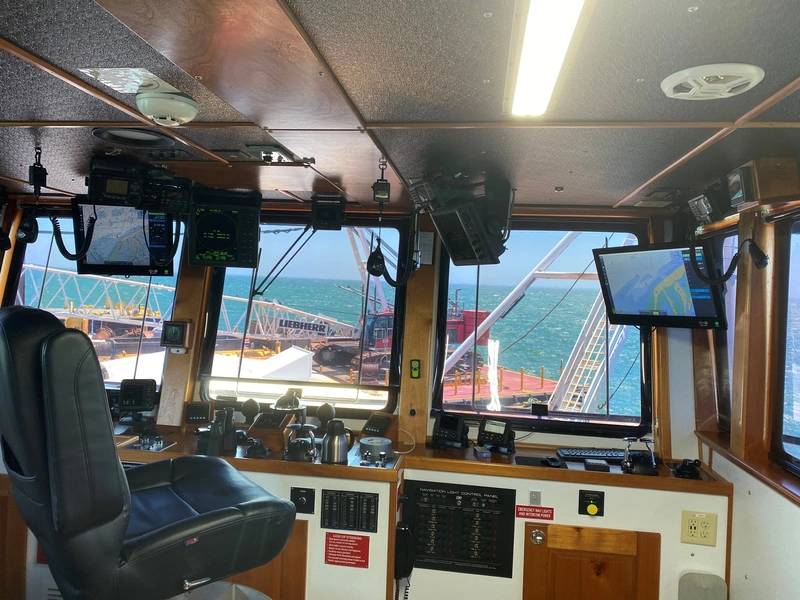 As mariners know, a person could swim past the territorial sea baseline. Coastal vessels then, and this is also an issue in the Great Lakes, as required by NVIC 01-16, need computer equipment meeting the IEC standard, which is tough, and expensive, reportedly costing as much as $5,000 per unit. If a company owns 10 vessels, do the math. But that’s not all. The USCG requires a backup. The cost could double if a duplicate IEC-standard system is required, which, seems likely, if there are no paper charts that comply with Coast Guard regs.

In contrast, vessels staying inside the sea baseline can use any hardware to display ENCs, e.g., a laptop issued by the IT team purchased on Amazon or at Staples.

AWO writes that, “For members operating domestically in the coastal sector, ECDIS is the only ENC display system the Coast Guard will accept for vessels that transit outside the territorial sea baseline. Between equipment, installation and subscription costs, and the costs of specialized crew training, an ECDIS can cost up to tens of thousands of dollars.”

Hardly an incentive to jump onto NOAA’s sunsetting. AWO writes that it wants to work with the CG to find “practical options” and it asks NOAA’s “assistance to resolve these issues.”

In an update, Caitlyn Stewart, AWO’s VP, Regulatory Affairs, said that NOAA and USCG staff have emphasized to AWO that the two agencies are coordinating their efforts regarding e-charts. With Lake Tahoe, for example, Stewart said the Coast Guard is reportedly working on “bridging guidance” for Lake Tahoe users subject to carriage requirements.

Additionally, the USCG advised AWO that the agency is working on new rules regarding ENCs and coastal operations.