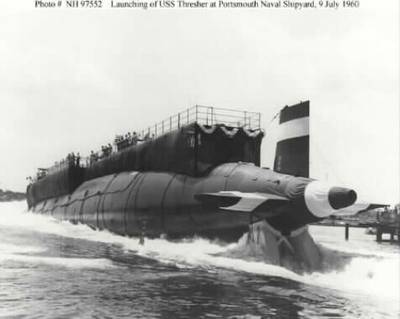 Northrop Grumman Corporation has donated $5,000 toward construction of a memorial to the Navy submarine 'USS Thresher'.

The company has made this donation in memory of two employees who perished when the Thresher sank in the Atlantic Ocean 50 years ago.

Prior to his employment as a field service engineer for Sperry Marine, Corcoran was a 20-year Navy veteran who had retired as a lieutenant. Corcoran was 46, leaving behind a wife and three sons.

Stadtmuller had graduated from Union College in Schenectady, N.Y., in 1958 with a bachelor's degree and had made a number of previous trips aboard Thresher as a field engineer for Sperry Marine. Stadtmuller was 26 years old when he died aboard the submarine.

"It is our honor to contribute to the memorial recognizing our employees and the dedicated crew of the Thresher," said Bill Hannon, vice president of Northrop Grumman Maritime Systems. "Their sacrifices serve as a reminder that there will always be dangers inherent in the vital work of maintaining global security."

Funded by outside donors, the Thresher Memorial features a 129-foot flagpole in a memorial courtyard with granite plaques from more than 250 contributors. The memorial is in Kittery, Maine, adjacent to the Portsmouth Naval Shipyard where the Thresher was based.