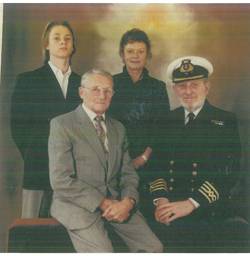 A group of veteran seafarers are encouraging youngsters to consider what has become an important but ‘forgotten profession’ as the country prepares to celebrate Merchant Navy Day on September 3.
Residents at the Royal Alfred Seafarers’ Society, a Surrey based home which provides dedicated accommodation and care to former seafarers and their dependants, said there is not enough awareness of the important role the Merchant Navy plays in our society among the younger generation.
The Merchant Navy has kept citizens in the UK fed, clothed and equipped for over 200 years, not to mention being a lynchpin of the economy, delivering overseas sales to every corner of the world.  Today, 95 percent of UK imports and 75 percent of UK exports still travel by ship with a fast-growing need for energy imports by sea set to increase in coming years.
Yet, despite this, interest in this industry as a career is lacking, with a quarter of children believing the film character Captain Jack Sparrow to be Britain’s most famous seaman while a third of adults did not know that the Merchant Navy transports cargo and passengers to and from the UK. (According to statistics sourced from a survey conducted by Seafarers UK).
Captain Roy Davis, a resident at the Royal Alfred Seafarers’ Society, worked in the Merchant Navy for 45 years and had some of the best experiences of his life travelling the world from Russia to South America, transporting all manner of goods from sheep to missiles.
He says: “I rather think it’s a forgotten profession. When I went to sea the British Merchant Navy was the biggest in the world and in every single village there was at least a couple of people that went to sea. The opportunities are not broadcast as they used to be and young people are missing out on the travel, broadening their outlook and seeing how people in other parts of the world live.
One of Captain Davis’ most interesting voyages involved transporting hundreds of live sheep from Australia to Singapore. Once there, he picked up 600 kids to take back to Australia where they attended school. “The sheep were much better behaved passengers than the kids!” he recalls.
“Part of the problem is there is a lack of awareness among young people regarding the role of the Merchant Navy. These days access to the latest gadgets or new trainers is easy from the local shops, youngsters don’t understand the journey they have been on to get there, which is very sad when we are about to mark Merchant Navy Day.”
Commander Brian Boxall-Hunt OBE, Chief Executive of the Royal Alfred Seafarers’ Society, said: “Given the apparent lack of knowledge of the importance of the Merchant Navy among young people, we at the Royal Alfred Seafarers’ Society  frequently engage with local schools to reiterate the importance and hopefully encourage some young people to consider it as a career.  In the communal areas of the home I hear some fantastic stories from people that have served in both  Royal and Merchant Navies and the camaraderie is incredible, it seems a shame for youngsters to miss out on that through lack of knowledge.”
Merchant Navy Day, on September 3, marks the contribution of the Merchant Navy to WWII and remembers those who lost their lives.  For more information on a career with the Merchant Navy please visit http://www.careersatsea.org

About The Royal Alfred Seafarers' Society
The Royal Alfred Seafarers’ Society is a registered charity and was established in 1865. It is incorporated under Royal Charter, with HRH the Princess Royal as its patron.  The Society’s primary aim is to provide accommodation, care and support to former seafarers, who may need special help and like-minded companionship in their old age due to the isolated nature of their careers. Under the Royal Charter, ‘seafarers’ include Merchant Navy, Royal Navy, fishermen and port workers, as well as their widows or dependants. The Society also welcomes residents of non-seafaring backgrounds when able to do so.