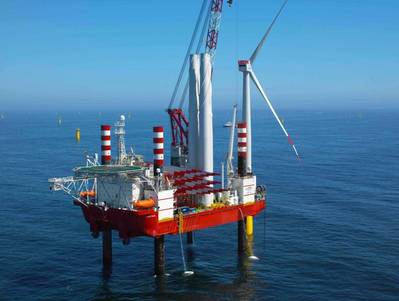 Offshore wind services company Eneti announced on Thursday it has entered into an agreement to acquire rival Seajacks, creating one of the world's largest, most capable fleets of wind turbine installation vessels (WTIV).

Eneti said its deal with sellers Marubeni Corporation, INCJ, Ltd. and Mitsui O.S.K., Lines Ltd. will see it acquire 100% of Atlantis Investorco Limited, the parent of Seajacks International Limited, for consideration of approximately 8.13 million shares, $299 million of assumed net debt, $74 million of newly-issued redeemable notes, and $12 million of cash. The transaction is expected to close by mid-August.

Founded in 2006, Great Yarmouth, U.K.-based Seajacks is the world's largest owner of WTIVs and has been installing wind turbines and foundations since 2009. Seajacks’ flagship, NG14000X design Seajacks Scylla, was delivered from Samsung Heavy Industries in 2015, and it is currently employed in Asia. Seajacks also owns and operates the NG5500C design Seajacks Zaratan which is currently operating in the Japanese market under the highly coveted Japanese flag, as well as three NG2500X specification WTIVs which are employed in the North Sea market.

New York-listed Eneti, formerly Scorpio Bulkers, is a newer player in the offshore wind sector, having announced its exit from dry bulk shipping in 2020. In May, the company ordered one WTIV from Daewoo Shipbuilding & Marine Engineering Co., Ltd (DSME) at a purchase price of $330 million. The vessel, an NG-16000X design by NOV subsidiary GustoMSC, is expected to be delivered in the third quarter of 2024.

Emanuele A Lauro, Eneti chairman and CEO, said of the Seajacks acquisition, “This transaction reflects the biggest step yet in our transformation into a world-class contractor for offshore wind. Seajacks is a market leader with a fleet of five advanced jack-up vessels; via this combination we will gain the valuable support of Seajacks shareholders who now become Eneti shareholders; moreover what is central to this combination is the committed and experienced professionals who join our team.”

Upon closing, existing Eneti shareholders will own 58% of Eneti and the sellers will own 42%. As a result of the transaction, Hiroshi Tachigami of Marubeni Corporation, and Peter Niklai of INCJ, Ltd. will join the Eneti board of directors.

Hiroshi Tachigami, of Marubeni Corporation, said, “Eneti is the right partner for our exceptional Seajacks team. Combining Eneti with Seajacks will deliver strategic and financial value to all shareholders. Marubeni Corporation, as well as INCJ, Ltd. and Mitsui O.S.K., Lines Ltd., are delighted to become shareholders in Eneti and participate in the next phase of expansion in the fast-developing offshore wind sector.”

Blair Ainslie, CEO of Seajacks, said, “We are pleased to partner with Eneti to drive the future growth of the business and consolidate our position as a world leader in offshore wind turbine installation.”

In addition, Eneti announced it has signed binding agreements with counterparties in Japan to transfer the existing lease finance arrangements of the SBI Tango, SBI Echo, and SBI Hermes, Ultramax bulk carriers built in 2015, 2015, and 2016 respectively, and SBI Rumba and SBI Samba, Kamsarmax bulk carriers built in 2015, to affiliates of Scorpio Holdings Limited for $16 million. This transaction was approved by the Company’s independent directors in January 2021, and the final vessel was delivered in July 2021, marking the conclusion of the company’s exit from the dry bulk sector.