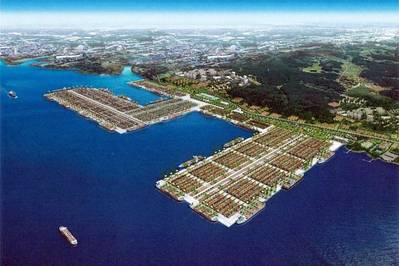 The Pasir Panjang Terminal Phases 3 & 4 development was shortlisted by a panel comprising judges from both the public and private sector and voted by members of the public into “Singapore’s Top 50 Engineering Achievements.”

The Engineering Feats @ IES-SG50 competition was organised by the Institution of Engineers, Singapore (IES) to seek out and recognise the top 50 engineering achievements across the various fields of engineering deemed to have made the greatest economic, infrastructural or societal impact to Singapore since 1965.
The results were announced at IES’ Golden Jubilee celebrations graced by Prime Minister Lee Hsien Loong at a gala on 1 July 2016.
To construct Pasir Panjang Terminal Phases 3 & 4, some 198ha of land (equivalent to 280 football fields) was reclaimed off the Pasir Panjang shore. Including existing firm land, PPT Phases 3&4 stand on 237ha of land.
Pasir Panjang Terminal Phases 3 & 4 add 15 deep water container berths, which when fully developed, would have an annual handling capacity of about 15 million twenty foot equivalent units (TEUs). This will increase Singapore’s overall container handling capacity to 50 million TEUs.
The additional container handling capacity will help to ensure that Singapore retains its status as a leading container transhipment hub.
One of the unique engineering innovations used in the construction of Pasir Panjang Terminal Phases 3 & 4 was the use of alternative materials for the reclamation fill.
For this development, nearly half of the reclamation fill used consisted of alternative materials such as marine clay from deepening of fairway and basins as well as excavated earth from land construction such as road, MRT and building projects. This innovative engineering process is much more sustainable than traditional reclamation method.
Another engineering innovation was the fabrication of the caissons—large concrete blocks that form the sea wall and wharf structure—which involved pre-casting them using specialised machines and transporting them into docking position using a floating dock.
As the caissons were of standard sizes and were fabricated in a factory-like environment at site, productivity and quality of caissons were increased.
For Pasir Panjang Terminal Phases 3 & 4, a total of 150 caissons were constructed. Each caisson measured 21m to 32m, and weighed between 8,800 tons to 12,000 tons; among the largest in the world at the time.
In reclaiming land for the Pasir Panjang Terminal Phases 3 & 4 development, the Maritime and Port Authority of Singapore (MPA) used the Reduce, Reuse & Recycle construction approach.
This has reduced the reliance on sea sand for reclamation and the need for more disposal grounds for waste materials, leading to substantial cost saving of $470 million. More importantly a more sustainable development is achieved.
To preserve Singapore’s marine biodiversity, live corals at Labrador Nature Reserve affected by the land reclamation process were relocated with the involvement of NGOs. The survival rate of the relocated coral is 80% which is considered to be high.
An environmental monitoring and management plan was put in place during the reclamation works which allowed the reclamation activities to proceed in an efficient manner, whilst ensuring protection of the environment and stakeholders.
“The Pasir Panjang Terminal Phases 3 & 4 project provided opportunities for our engineers to test-bed innovative construction methods, all the while keeping at the top of their mind the need for sustainable development. We are proud that this project has been recognised by the public for the impact it has on Singapore’s economy. Many of the engineering innovations first deployed in this development are currently being implemented to a greater degree at the Tuas Terminal Phase 1, now in construction,” said Andrew Tan, Chief Executive of MPA.
Loh Yan Hui, Deputy Chief Executive Officer, Infrastructure, Surbana Jurong, said, “We are pleased to support MPA in their efforts to strengthen Singapore’s port infrastructure that will reinforce Singapore’s position as a global hub port. The Pasir Panjang Port Terminal Phases 3 & 4 project is an engineering feat that boasts the use of many innovative and sustainable engineering processes and solutions. We are honoured that the project is recognised for its contribution towards Singapore’s development.”