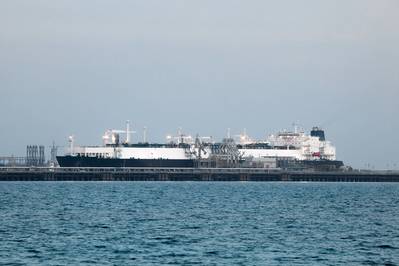 As ENN aims to ramp up winter supplies in eastern China, the tanker 'Asia Integrity' docked at the Zhoushan terminal on the same day, bringing 145,000 cubic meters of LNG from Australia supplies to mark the launch of China's first privately-owned LNG facility.

ENN has signed long-term deals including sales and purchase agreements with Chevron Corp and Australia's Origin Energy and also has an agreement to buy LNG from Total. The deals total about 1.5 million tonnes per year of LNG.

ENN is also expecting to build a pipeline connecting the terminal and Ningbo on the mainland by the end of 2019, Song said. Currently, the company uses barges and trucks to deliver LNG from the terminal.

The newly opened terminal has received 120,000 tonnes of LNG so far since trials began in August, said Zhang Hao, vice president of the company's energy trading group, in a separate speech at the ceremony.

The company has also prepared more than 400 trucks to deliver the gas from its terminal this winter in order to meet strong demand, Zhang said.

Last winter, many villages were left without gas supplies because of a surge in demand because of China's gasification push. The government switched millions of Chinese homes to gas heating from coal to reduce air pollution but was caught out by the increased consumption.