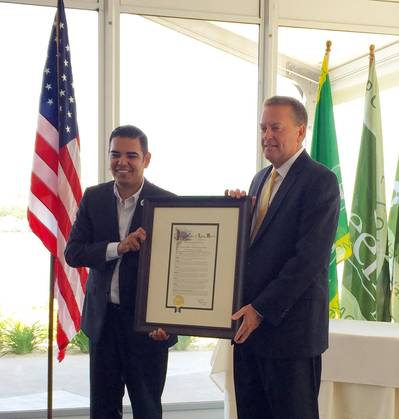 The awards are an outgrowth of the groundbreaking Green Port Policy, the Port’s commitment to improving the environment. Approved in 2005 by the Long Beach Board of Harbor Commissioners, the policy put the Port on the path to become a world leader in environmental stewardship.

At today’s event, Mayor Garcia introduced the “Mayor’s Green Port Award,” which was presented to terminal operator Long Beach Container Terminal. LBCT was named the top Environmental Excellence winner overall for its commitment to working with the Port to implement clean technologies and to create the world’s most advanced container shipping terminal.

“Long Beach Container Terminal has shown exemplary leadership in the fight for cleaner air. The company is a vital part of the Port of Long Beach as a business partner and as a partner in improving life for the people of Long Beach,” said Mayor Garcia. “I congratulate LBCT and all the winners today for working to help the environment.”

The Port also awarded Green Port Policy 10th Anniversary “Environmental Excellence” honors to companies and groups for going above and beyond the past decade in helping the Port achieve its ambitious environmental goals:

* Mediterranean Shipping Co. or MSC, for its performance in the Port’s Green Flag Vessel Speed Reduction Program, which since 2005 has asked vessel operators to slow down to 12 knots near the Port, in order to reduce air pollution.
* Tesoro for top performance in the Port’s Green Ship Program, which since 2012 has encouraged shipping lines to dispatch their cleanest ships to Long Beach.
* An environmental coalition of the groups Natural Resources Defense Council, Coalition for Clean Air, East Yard Communities for Environmental Justice and Communities for Clean Ports/EndOil, for highlighting environmental issues and bringing about meaningful change.
* SSAT/Matson terminal for its consistently high performance in the Port’s stormwater runoff control program, which seeks to improve and safeguard water and sediment quality in the harbor.
* Ability Tri-Modal trucking company for its leadership in the Port’s Clean Trucks Program, which has slashed diesel pollution from trucks by 90 percent since 2008.
* Total Transportation Services Inc., a trucking company, also for leadership in the Clean Trucks Program and in technology advancement.
* Pacific Harbor Line, the Port’s short line railroad, for its relentless pursuit of cleaner and cleaner locomotives to move freight in the harbor complex.

In addition, nine vessel operators overall were honored at the event as top performers in the Port’s Green Flag Vessel Speed Reduction Program.

Winners who slowed down within 20 nautical miles were Carnival Cruise Lines, CMA CGM, Hanjin Shipping Co. Ltd., Matson, Inc. and Alaska Tanker Co. Alaska Tanker received special honors for 100 percent compliance from 20 miles since 2006. In the 40-nautical-mile category, the winners were COSCO, “K” Line, MOL and Mediterranean Shipping Co. In addition, more than 150 vessel operators earned the coveted Green Flag for their participation in the program in 2014.

The Port of Long Beach is one of the world’s premier seaports, a gateway for trans-Pacific trade and a trailblazer in goods movement and environmental stewardship. With 175 shipping lines connecting Long Beach to 217 seaports, the Port handles $180 billion in trade annually, supporting thousands of Southern California jobs.