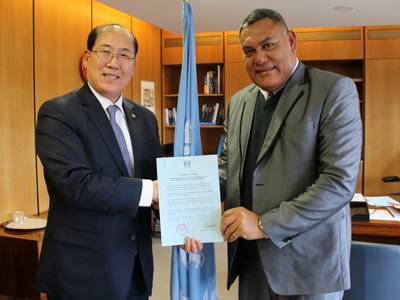 Fiji has acceded to six IMO treaties, including important conventions covering ballast water management and the control of harmful anti-fouling systems on ships. This brings the number of States party to the Ballast Water Management Convention to 49, with the aggregate remaining at 34.82 percent of the world's merchant fleet tonnage (based on global tonnage data as at end-February 2016).

Jitoko Tikolevu, High Commissioner of Fiji to the United Kingdom, met IMO Secretary-General Kitack Lim to deposit the instruments of accession.
The full list of treaties acceded to by Fiji today is as follows: