Erdogan: Turkey will Retaliate to Any Attack on Seismic Vessel in Mediterranean 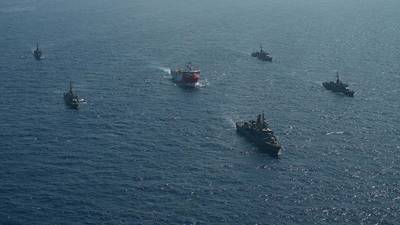 President Tayyip Erdogan warned Greece on Friday that Turkey will retaliate against any attack on its survey vessel Oruc Reis in the eastern Mediterranean in an escalating row between the NATO allies over gas and oil exploration in the region.

Turkey and Greece are vehemently at odds over overlapping claims for hydrocarbon resources in the region, and tensions rose after Ankara launched exploration operations in a disputed area of the Mediterranean on Monday.

On Thursday, Erdogan warned of a "high price" if Oruc Reis was attacked and suggested Turkey had already acted on that warning.

Speaking to reporters after Friday prayers in Istanbul, Erdogan said one of the warships accompanying Oruc Reis, the Kemal Reis, had "given the necessary response" to an attack by Greek ships on Thursday. "If this continues, they will receive their answer in kind," he said.