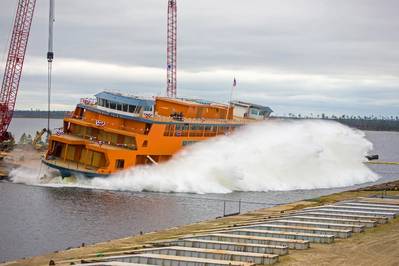 The new Staten Island Ollis Class Ferries series are named after fallen soldier of the US Army 10th Mountain Division at Fort Drum, 'Climb to Glory', Army Staff Sgt. Michael H. Ollis, a Staten Island native killed in Afghanistan on August 28, 2013 serving during Operation Enduring Freedom. The first of the series, Hull 219, is named in his honor. Staff Sgt. Michael H. Ollis, of the 2nd Battalion, 22nd Infantry Regiment, 1st Brigade Combat Team, 10th Mountain Division (Light), stepped into the path of a Polish officer, blocking him from the suicide vest of an insurgent who had raided Forward Operating Base Ghazni. Ollis has received several honors posthumously including: Distinguished Service Cross, Purple Heart, Bronze Star, Silver Star, The Audie Murphy Medallion, Polish Gold Star Medal of Honor, and the Afghanistan Star from Poland for his valor. He was 24 years old.

Friday’s launch was also held in honor of long-time employee, Kenny Winpigler, who retired in October 5, 2018 after 33 years with Eastern. Kenny started his career with Eastern in 1985, holding various positions including: Shipfitter, Foreman, Production Controller, Estimating, Project Manager for 34 completed vessels, and most recently Senior Project Manager overseeing the SSG MICHAEL H. OLLIS construction. Kenny is a beloved member of the Eastern family, a friend to everyone he worked with and as a project manager highly respected by the clients served. Joey D’Isernia commented, “Everyone at Eastern Shipbuilding and throughout the Marine Industries, knows Kenny as a capable professional and dedicated shipbuilder. Through his calm and even keeled approach to project management, he fostered long lasting relationships with all those who’ve had the pleasure working with him. The amazing is thing that there are many ESG employees here today that consider Kenny as a significant influence in their life and as a mentor. What a lasting legacy to have built.”

Since the 1980’s there has been a remarkable revival of ferry services in many US waterfront cities, but COVID has wreaked…