By Jonathan Saul and Charles Regnier May 7, 2020 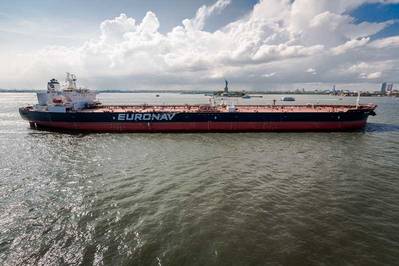 The world is still struggling with an oil glut due to a drop in demand caused by the coronavirus even after top oil producing countries have cut output. The glut has prompted a scramble to find storage options on land and sea.

"At the moment we continue to be in a world that is oversupplied with oil and the oil has to go somewhere and the land storage is full," he told Reuters.

Euronav's fleet currently includes 42 very large crude carriers (VLCCs) - each of which can carry 2 million barrels of oil - as well as 25 smaller suezmax tankers which can each carry 1 million barrels. It also has two megatankers each with a maximum capacity of 3 million barrels.

De Stoop said 65 VLCCs around the world had been stationary for at least 15 days, indicating they were likely to be storing oil, with a further 38 suezmaxes also holding oil at sea.

That would indicate nearly 170 million barrels of crude were held on the water, which is a record high.

De Stoop said tankers were being parked in hubs around the world especially around the U.S. Gulf, the Middle East, Singapore and South Africa, adding that five of Euronav's VLCCs were on contracts with storage options.

The crude market has been trading in what is known as contango, where forward prices are higher than immediate prices. This market structure encourages traders to park barrels in storage in the hopes of selling them for a profit later.

De Stoop said "the first phase" of storage interest was driven by traders looking to benefit from the contango.

"Today, the requests that we are receiving are very different - it's not from traders, it is from people who are looking for space to store the oil that has been produced," he said.

The company said it was too early to quantify the long-term impact of the coronavirus on its results after it reported first-quarter earnings before interest, taxes, depreciation and amortization (EBITDA) of $327.9 million, up from $125.3 million in the same period a year ago.

KBC Securities said Euronav was well set up for a "great" second-quarter.