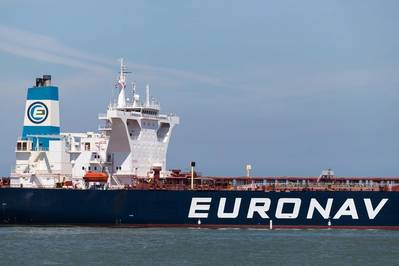 "Management has good reason to be more optimistic on the winter season," ING's analyst Quirijn Mulder said after the group, which provides crude oil shipping and storage services, said freight rates had improved substantially since March.

Under pressure to pump more crude oil as Western sanctions enacted in response to the war in Ukraine curtailed Russian oil exports, the Organization of the Petroleum Exporting Countries and allies is set to raise its output goal by 100,000 barrels per day from September. Read full story

Euronav said it expected the diversification of countries' crude suppliers due to dislocations from the conflict to drive longer ton-miles - an industry measure incorporating volumes and distance, absorbing additional vessel capacity.

The expectation going forward is that global oil demand growth will need to be satisfied by non-OPEC producers in the Atlantic Basin, the company added.

The Antwerp-based group's proportionate earnings before interest, taxes, depreciation, and amortization (EBITDA) came in at $74.9 million in the second quarter, up from $22.6 million a year earlier.

Its net loss for the period narrowed to $4.9 million, against a loss of $89.7 million last year.

ING's Mulder flagged that Euronav's VLCC fleet had earned around $12,700 per day so far in the third quarter, about 30% behind the previous quarter's level.

"Suezmax is quite good," he added. "However, for the short term, it helps marginally as Euronav is mainly a VLCC player."

"We believe the merger has a good chance to succeed, but a stubborn family could result in a long and bumpy process," he said.