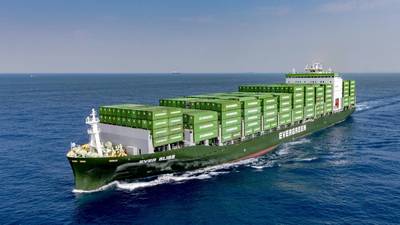 Taiwanese shipping line Evergreen has confirmed its plans to build a total of ten 23,000 TEU containerships.

According to a stock exchange filing, the new vessels would be built at three shipyards  in South Korea and China.

According to the reports from the South China Morning Post, the enormous order will cost Evergreen anywhere between US$1.4 billion and US$1.6 billion. It is estimated that each vessel will cost between $140 million and $160 million.

Six of the vessels will built at Samsung Heavy Industries shipyard in South Korea, two at the Jiangnan Shipyard and two at Hudong-Zhonghua Shipbuilding, a subsidiary of the China State Shipbuilding Corporation that builds ships for the Chinese military.

The first of the giant ships, which will have capacity of 23,000 twenty-foot equivalent units (TEUs), is likely to enter service in 12 to 18 months’ time.

According to Alphaliner, Evergreen's existing fleet comprises 206 ships with a total capacity of 1.3 million TEU, making it the seventh largest ocean liner in the world.