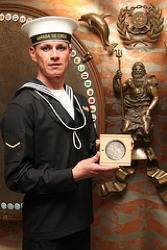 Canadian & Chilean rescuers presented with Award for Exceptional Bravery at Sea 2012 at IMO HQ in London.

Sergeant Janick Gilbert (posthumously), Master Corporal Max Lahaye-Lemay and Master Corporal Marco Journeyman, crew members of the Royal Canadian Air Force’s 424 (Transport and Rescue) Squadron, were nominated by the Government of Canada, in recognition of the exceptional bravery which was displayed by them, in saving the lives of two Inuit hunters stranded in an open boat in icy waters near Igloolik, Nunavut.

Master Corporal Max Lahaye-Lemay and Master Corporal Marco Journeyman accepted their certificates in person, while Mrs. Mélisa Lesquir, Sergeant Gilbert’s widow, and his mother Mrs. Diane Pageau Gilbert, accepted his certificate on his behalf, and received the medal for the joint winners.

Able Seaman César Flores, a rescue swimmer in the aerial detachment of the Chilean Navy, was nominated by the Government of Chile, in recognition of the exceptional bravery which he displayed in rescuing seven survivors from the motor launch Rosita V, in Locos islet, Moraleda Channel, in extremely dangerous weather, and at considerable risk to his own life.

Able Seaman Flores received his certificate and award in person. He was accompanied by His Excellency. Mr. Tomás E. Müller Sproat, Ambassador Extraordinary and Plenipotentiary and Permanent Representative of Chile to IMO.