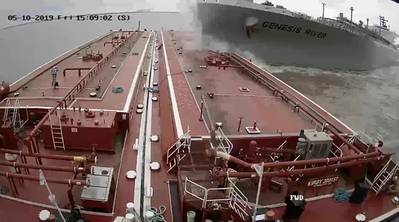 Excessive vessel speed contributed to a 2019 collision between a liquefied petroleum gas (LPG) tanker and a barge in the Houston Ship Channel that resulted in the release of 11,000 barrels of petrochemicals, the National Transportation Safety Board (NTSB) said Tuesday.

The 754-foot-long tanker Genesis River collided with the 297-foot-long tank barge 30015T on the Houston Ship Channel May 10, 2019, in Texas’ Upper Galveston Bay. The collision breached two cargo tanks in the barge, spilling approximately 473,600 gallons of reformate, a gasoline blending stock. There were no injuries.

The pilot’s decision to transit the wide-beam, deep-draft Genesis River in “navigation full” mode at “sea speed” subjected the vessel to greater hydrodynamic forces than had it been traveling at slower maneuvering speeds through the shallow and narrow lower Houston Ship Channel, the NTSB said in Marine Accident Report 21/01.

Sea speed is the maximum efficient speed of a vessel, but it is generally used in open oceans because the propulsion engine mode required for this setting limits the ability to change speeds in an emergency. The maneuvering limitations imposed by operating at sea speed prevented a rapid increase in engine speed when needed to improve rudder effectiveness. Transiting the channel at sea speed, investigators said, “left little margin for error and introduced unnecessary risk.”

“Operating at sea speed reduces the ability to maneuver out of a dangerous situation,” said NTSB Chairman Robert L. Sumwalt. “This is especially true in the Houston Ship Channel, a challenging waterway with a long history of accidents.”

The NTSB issued three new recommendations to Houston Pilots, including advising their members to avoid transiting large vessels at sea speed in the lower Houston Ship Channel and avoiding any passing arrangements between large vessels in the northern and southern terminuses of the Bayport Flare. The NTSB also recommended that large vessels such as the Genesis River be sufficiently trimmed by the stern to increase maneuvering ability.

The collision occurred after the outbound Genesis River had passed an inbound ship of similar size at the southern end of the Bayport Flare. Immediately after passing the other ship, the Genesis River approached the channel’s west bank, then sheered to port, crossing over to the opposite side (east) of the channel where, in the barge lane ahead, was barge 30015T, one of two tank barges being pushed by the towing vessel Voyager.

The NTSB also reiterated two earlier recommendations made to the U.S. Coast Guard in 2016 urging the Coast Guard to identify areas of increased vessel conflicts or accidents that could benefit from the use of special routing measures. In 2017, the Coast Guard replied to the recommendations by saying it would implement a risk assessment program, but the NTSB said it has not received further information on this initiative after the Coast Guard’s initial correspondence.