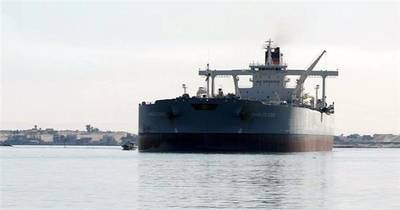 Egypt will open an expansion to the Suez Canal to great fanfare on Thursday, the centrepiece of President Abdel Fattah al-Sisi's plans to revitalise the country's economy after years of damaging political turmoil.
Some analysts and economists say, however, that the mega-project may fail to meet the great expectations.
The Suez extension was announced by Sisi a year ago and billed as a major national accomplishment on a par with President Gamal Abdel Nasser's nationalisation of the Suez Canal in 1956 and the building of the Aswan Dam.
The estimated $8.2 billion project includes a 35-km (22-mile) parallel waterway flanking the existing 145-year-old waterway, the closest link by sea between Asia and Europe.
It also includes a deepening and widening of 37 km of the existing canal. This will cut transit times for southbound ships by seven hours and allow larger vessels easier passage.
The Suez Canal Authority expects a windfall of additional revenue -- $13.23 billion annually by 2023 compared with $5.3 billion in 2014, with the number of daily vessels rising from 49 to 97 over the same period.
But some are sceptical of the official numbers and suggest that sluggish world trade makes it unlikely the project can deliver immediately on its promise.
Ahmed Kamaly, an economist with the American University in Cairo, said the projections were "wishful thinking".
"There was no viability study done, or known of, to assess the viability of the project," he said.
For the project to reach its revenue targets, world trade would have to grow by 9 percent annually until 2023, said William Jackson of Capital Economics -- higher than the 3 percent average seen over the past four years.
Since 2011, Suez Canal revenue growth has failed to even keep pace with growth in world trade.
While global trade volumes rose by an average of 2.9 percent from 2011-2014, Suez Canal revenue rose by just 2 percent during the same period, Jackson said.
There could be further risk from a Panama Canal expansion set to be completed in 2016 which could steal traffic from the Asia-North America route which the two canals compete for, said Michael Frodl, of U.S.-based consultancy C-Level Global Risks.
In a troubling development, a video purportedly from Islamic State's Egypt-affiliate, Sinai Province, showed a Croatian hostage who said the group threatened to kill him in 48 hours.
Sinai Province is most active in the Sinai Peninsula which is the epicentre of an increasingly bold insurgency and borders the Suez Canal, the Islamist-ruled Gaza Strip and Israel. Authorities say the canal is completely safe.
In Arish, capital of North Sinai, security sources said the army had deactivated a bomb found near a military-affiliated hotel.
Support the Project
Authorities have been in overdrive to sell the project to Egyptians and the world. On the streets of Cairo, colourful flags flutter from lampposts around Tahrir Square and festive lights drape the city.
More than 9,000 km (5,590 miles) away, in New York's Times Square, a billboard reads "Egypt boosts the world economy".
Authorities have declared Thursday a national holiday, suspended fees for public transport and posted a sermon to be delivered in mosques on Friday which declares that "all Egyptians, here and abroad, must support this giant project".
But the canal's largest client, Maersk Line, said that while the expansion would bring savings from fuel costs and by using larger vessels, it would not send more ships through the canal in 2015.
"Last year we put 1,400 ships through the canal. We will put roughly the same number through this year," said Mohammad Shihab, managing director of Maersk Line Egypt.
The new canal "will not change much overnight," said Nicholas Sartini, a senior vice president for the French CMA CGM Group, the world's third-largest shipping group, which sends an average of two vessels per day through the canal.
Egypt is investing for the longer term to have a larger canal that can accommodate increasingly larger ships, he said.
If there are any immediate benefits for the expansion, they might just be political more than economic, Kamaly said.
Egypt has witnessed turbulent times since 2011 during which two presidents were overthrown and the economy seized up.
"(The canal) will unite the people around a national project that people can look upon," said Kamaly.
But he questioned whether the money would have been better spent on education, health and infrastructure.
(By Eric Knecht; Additional reporting by Jonathan Saul; Editing by Yara Bayoumy and Mark Heinrich)