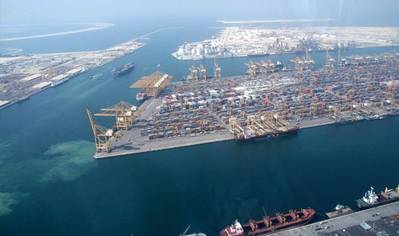 Last of the 65 ton blocks that make up the foundation of the extended quay wall of the 1 million TEU expansion laid in place.

The Jebel Ali port expansion, scheduled to open for business in the second quarter of 2013, extends the quay wall by 400 metres to 3000 metres, allowing the simultaneous handling of six 15000 TEU mega ships.

Meanwhile, across the harbour from Terminal 2, work is also well underway on the brand new, state of the art, 4 million TEU capacity Terminal 3, set to open in 2014, taking Jebel Ali’s total capacity to 19 million TEU. When the expansion work is complete, Jebel Ali Port will be able to handle ten of the next generation 18,000 TEU mega vessels at the same time – the only port in the region able to do so.

Welcoming the progress made on the expansion work, H.E. Sultan Ahmed Bin Sulayem, Chairman, DP World, said: “DP World’s pipeline of expansion projects and new developments are in line with the industry’s emerging horizons both in terms of capacity and technology. As our flagship facility and the largest port in the Middle East, Jebel Ali has consistently brought efficiency to one of the busiest supply chains in the world. DP World remains committed to supporting Dubai’s unparalleled position as the region’s commercial hub and welcoming the next generation mega container ships.”