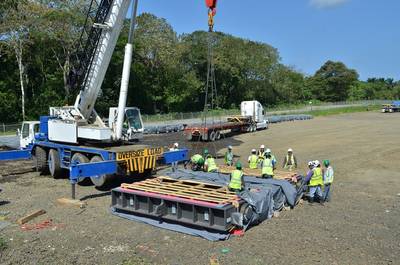 The Panama Canal Expansion Program passes a milestone with the arrival of first shipment of valves for the third set of locks.

The valves were built in South Korea by Hyundai Samho Heavy Industries.

“This marks a new milestone for the Panama Canal expansion works, particularly for the construction of the new locks,” Panama Canal Administrator Jorge L. Quijano said.

Arriving on board the vesel BCC England, the first shipment includes 47 valves that are part of the Post-Panamax locks electromechanical system that will regulate water flow between the chambers, the culverts and water-saving basin conduits.

In addition to the valves, the shipment included eight bulkheads of different types for the new locks and four trash racks that will be installed on the wing-walls along the water intakes to avoid the passage of debris from the lake and into the locks chambers.

The valves, bulkheads and trash racks first arrived at Manzanillo International Terminal facilities, in the Colon province, and were later on transported by land on flat-bed trucks. A total of 36 elements were delivered to the expansion site on the Atlantic side and 23 to Pacific site. A total weight of 1,304.49 tons of steel was transported during the seven-day operation.

Local companies subcontracted by Hyundai, handled the logistics, land-based transportation and unloading of the valves.

The Panama Canal Administrator highlighted the professionalism with which the operation was conducted, and the experience gained by the local heavy equipment operators and logistics specialists handling elements never before seen in the country.

A second shipment is scheduled to arrive at the end of January, and by the end of 2013 a total of 158 valves (culvert, equalization and conduit), 84 bulkheads and 328 trash racks will have arrived for the project.