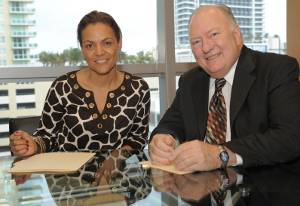 Plans call for new jetties and increased depth, along with state-of-the-art container terminal facilities to be jointly developed

Haiti-based WIN Group and South Fla.-based Santé Holding announced having reached an agreement to re-develop Terminal Varreux, S.A. in Port-Au-Prince, the largest privately-owned shipping terminal and port facility in Haiti. The fourth generation WIN Group is a Caribbean conglomerates, with stakes in multiple industries.  Santé Holding is headed by Charles Towsley, former director of the Port of Miami. Santé’s team is partnering with the Rovirosa family, marine port operators, who currently operate terminals in the Port of Miami and Port Everglades, Fla.

Terminal Varreux currently consists of multiple berths connected to liquid and dry bulk pumping pipelines. The facility was damaged during the recent earthquake, but quickly repaired in order to allow crucial tanker shipments of fuel to Haiti, as Terminal Varreux receives and stores more than 70% of Haiti’s fuel.

The redevelopment plans include a new port, additional jetties and a 150 acre terminal open to all maritime lines looking to efficiently service Haiti.  The expansion will include a modern container and break-bulk shipping terminal and ancillary facilities to service both the short and long-term shipping needs of Haiti.  The agreement also includes remediation and expansion of existing piers.

Under the terms of the agreement, WIN Group will retain control of the dry bulk, liquid bulk and petroleum operations, while the new facilities will be operated by the new joint venture.  Feasibility plans are currently being completed with specific project time-frames due to be announced shortly.

“The creation of the new port facilities will greatly increase the capacity of Port-au-Prince to accommodate the on-going demand for relief and recovery cargo into Haiti,” adds port development expert and Santé Holding CEO & Chairman, Bruno E. Ramos, AIA. “Long-term, this is an ideal facility to serve projects such as the West Indies Free Zone, WIN Group’s $45 million industrial park to be developed along with the Soros Economic Development Fund near Port-au-Prince's impoverished Cité Soleil neighborhood, a project temporarily halted because of the earthquake.”