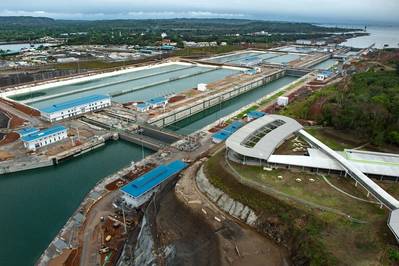 Effects of the canal’s expansion are reverberating well-beyond Panama’s shores, as ports around the world are in varying stages of work to deepen and widen their channels to accommodate the growing number of Neopanamax vessels that can now transit the canal.
Now nearly one year on from the first vessel transit through the expanded waterway, many ports are benefitting, particularly those along the U.S. East Coast.
As it was for the canal, January 2017 was also a record month for many U.S. East Coast ports, including the Ports of Charleston, Philadelphia and Savannah, which recorded 28 percent, 34 percent and 16 percent container volume growths, respectively. For the Port of Charleston, its monthly cargo record follows an annual cargo record set in 2016, after handling 2 million TEUS.
Ports in Virginia and Baltimore also saw record-breaking volumes in 2016. The Port of Virginia handled more than 2.65 million TEUs, a 4.2 percent increase compared to the year prior, while the port of Baltimore handled more than 10 million tons of general cargo and a record number of containers. This growth can be attributed in part to the canal, which has and will continue to draw additional cargo volumes to the region, as ports continue to expand.
In Florida, PortMiami is “Big Ship Ready”, having completed more than $1 billion in infrastructure improvements, including its Deep Dredge Project. The project was responsible for increasing Miami’s channel depth up to 52 feet, and allowing the port to welcome its first Neopanamax vessel on July 9, 2016. Other ports, such as the Ports of Virginia and Charleston, have plans to invest millions of dollars for dredging projects, infrastructure improvements and other work to enhance their logistics capabilities. The Port of New York and New Jersey recently announced plans to increase investments to $200 million at the Port Elizabeth facility.
U.S. East Coast Ports will not be the only ones to benefit from the expansion. So far, the Panama Canal has welcomed 11 new services through the waterway as global shipping lines are redrawn to take advantage of the economies of scale the canal provides. The ACP anticipates that as this number continues to grow, so too will the expansion’s impact across the world.
“The expanded canal has had a global ripple effect on maritime trade," said the Panama Canal's Strategic Relations Manager, Marianela Dengo. “However, the true impact will be felt gradually over the long-term, and we’re very excited for the growth still to come.”