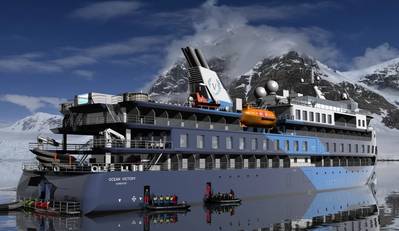 Expedition cruise vessel Ocean Victory, under construction at the CMHI Haimen shipyard in China, is slated to commence sea trials by the end of the week, Norwegian designer Ulstein revealed Thursday.

The newbuild is the third in the Ulstein-designed CX103 INFINITY series for U.S.-based owner SunStone Ships.

The 104.4-meter-long vessel offers capacity for 200 passengers in 93 suites, 68 with balconies, nine with French balconies and 16 with panoramic windows. An infinity pool has been installed, and the bridge wings have been replaced by two observation platforms.

The vessels are Ice Class 1A, Polar Code 6, and are being built with Safe Return to Port, dynamic positioning, and Zero Speed Stabilizers. The vessels featuring the X-Bow by Ulstein Design & Solutions.

All ships in the series are on long-term hire to various operators. The Ocean Victory has been chartered out to Albatros Travel for Antarctica journeys in the winter season and to American Queen Steamboat Co., through its sister company Victory Cruises, for Alaska cruises in the summer.

The first, Greg Mortimer, was delivered in September 2019 and is chartered to Aurora Cruises Australia.

The fourth ship, Ocean Explorer, launched in August 2020, will work for the Vantage Cruise Line, and is scheduled for delivery in 2021.