Eye on Design: What is Old Can Be Green Again 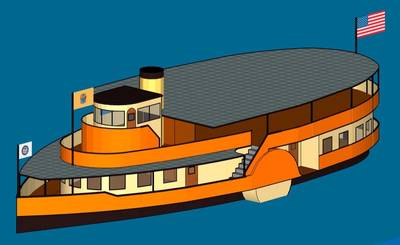 The eventual dominance of screw propellers over paddle wheels was not even driven by technological considerations, but rather by a tug of war between a paddlewheel propelled vessel and a screw propelled vessel. This trial was organized by the British Admiralty and occurred in 1845 between two similarly sized ships, the screw Rattler and the paddlewheel Alecto. Rattler won and most development money went to screw propellers and paddle wheels started their fade into obscurity.

It is actually very difficult to compare the effectiveness of one against the other. As a matter of fact, many years ago I came across a 1940’s or 1950’s SNAME paper that performed a further analysis of paddlewheels that indicated that in certain speed and draft ranges articulated paddle wheels are more efficient than screw propellers. Articulated paddlewheels are paddle wheels that allow the blades to stay vertical when they pass through the water (think in terms of mounting a Voith Schneider prop as a paddlewheel).

However, alternatives like this are not always decided on efficiencies alone. In 1845 the British Admiralty particularly liked propellers because they were harder to disable by gunfire (a flawed argument if one considers that the first naval steam ship, Fulton’s 1814 Demologos, had a paddlewheel that was almost invulnerable to gun fire.) More significantly, a screw propeller is much less sensitive to a seaway and to changes in draft. I saw no reason to use paddlewheels and ignored them until very recently.

I started thinking about paddlewheels because of an upcoming event. in 2026 we will be celebrating the United States Sesquicentennial (let’s call it USA250 for short). I like a party, and it made me think of the 1976 Operation Sail. That was a fun event and maybe we should organize something like it again. I live on a river in striking range of New York City, and maybe we could use the next few years to build a local replica vessel that could participate in such an event. The river was famous for three types of vessels. Shrewsbury packets, shallow draft centerboard schooners that carried people, produce, and oysters to New York City, shallow draft side wheeler passenger vessels that ran passengers between the river and New York City into the 1920’s, and rum runners based on Seas Bright Skiffs that became the prototypes of today’s modern recreational planing power boats. A replica on one of those could be a great way to celebrate USA250.

A replica schooner initially seemed most attractive since it touches on the earliest days of the United States and I prefer sailing over anything, but it is very difficult to get the financials to work on a USCG public sailing vessel. I also liked the idea of a rum runner, but once I started to think in terms of actual designs a “replica” side wheeler became very attractive. I put the replica in quotes since replicas can range from totally authentic to no more than evoking the spirit of the original.

Actual totally authentic replicas are almost always disappointments. They are of very limited use and very expensive to build and maintain. Too many authentic replicas rot away in some corner of the harbor soon after their main event because they serve no further purpose. As such, I was thinking in terms of evoking the past with new technologies and materials.

And then things got interesting.  In laying out a paddle wheeler, the first question is what prime mover to use. Diesel is loud and noisy, steam is very expensive and difficult to operate. Why not electric drive? Why not solar electric? And then things took off.

Side wheelers are relatively slender vessels with lots of deck space. Lots of deck space mean lot of space for solar panels. Steam vessels were very quiet and so are electric drive vessels.

One reason side wheelers fell out of favor is because the centrally located engine ate up prime real estate, but electric drive is very compact and the side wheel drive mechanism would barely intrude into the public spaces. Batteries are heavy and these boats need ballast, batteries make great ballast. And articulated paddlewheels allow shallow draft and are no less efficient than propellers in this application. A solar electric paddle wheeler would not only look like an early 1900’s paddle wheeler, it would feel and sound like one too.

So maybe I want to cheat a little and still fit a standby generator for long runs, but that can be hidden anywhere below deck, and it will add to the ballast. Regardless, the boat will not carry a lot of fuel and therefore the boat will not change much in draft, so paddlewheel immersion is of little concern. The trade will be the Navesink River, Shrewsbury River and NY Harbor and Raritan Bay in good weather; perfectly fine for paddlewheels. Build it out of aluminum and it will last nearly forever or use titanium for the hull and it will actually last forever.

I had our high school intern Riley Flanagan generate a first concept. It is not optimized yet, but I like what I am seeing.

It is cute and will look great on our river, but what is really cool is that I ran some cost numbers and it is actually a viable commercial vessel. For example, the cost of construction of articulated paddlewheel propulsors would barely be higher than the cost of a screw propulsion system. As matter of fact, while this vessel would be somewhat more expensive than a “conventional” dinner cruiser, its life cycle cost would be much lower.

Once the USA250 festivities are over, this boat would be a very attractive low operating and maintenance cost passenger cruise vessel for wildlife viewing, excursions, dinner cruises, weddings or special event charters.

I doubt that a screw propelled vessel would have worked as well in this context, and what makes paddlewheels viable here is the emergence of electric and solar propulsion. What is old is now green. I suspect this is only the tip of the (global warming threatened) iceberg. Similar trends are occurring with sail and other old technologies and old concepts will re-emerge as they blend with new technologies. As engineers we should never forget to mine the past for good ideas.

I mean: “Why reinvent the wheel?”