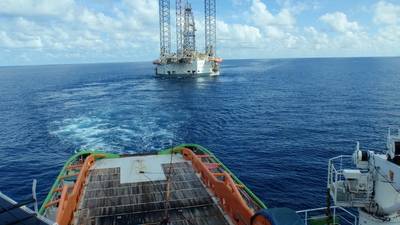 The Naga 3 is a Gusto MSC CJ46-X100-D design jack-up rig, built in 2010 by Dubai Drydocks World and owned by UMW Petropipe/Singapore Drilling. The 70 meters long rig can drill up to 9,144 meters in depth. At the Vung Tau shipyard the Naga 3 was prepared for her next job offshore Vietnam for the Japan Vietnam Petroleum Company (JVPC).

After the towage to the offshore location the Fairmount Expedition assisted with the installation of the rig. Also some cargo runs were performed. During these operations, several JVPC employees were accommodated onboard.