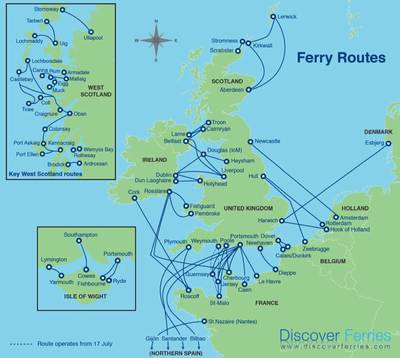 Britain’s ferry industry showed growth across all its travel sectors last year, with passenger numbers up 2.6% overall to 38 million, all cars carried up 1.1% to 8.37million, and coaches up overall  4.1% to 158,470 -  according to 2013 “Ferrystat” figures, quoted by industry body, ‘Discover Ferries’.

Continental ferry passenger numbers lead the way
Routes to the Continent via the English Channel and North Sea provided the best passenger growth  in 2013, up 5.8% at 17.66 million. Within this sector, the short sea continent routes from Dover to Calais and Dunkirk, with operators DFDS, MyFerryLink and P&O Ferries, grew passenger numbers by 6.8% to 12.7million, while the longer Western Channel routes with operators Brittany Ferries, DFDS and Condor Ferries grew 4.2% to 2.8 million.

North Sea routes to the Continent by DFDS, P&O Ferries and Stena Line, grew passenger numbers by 1.7% to 2.13million.

Domestic mainland ferry routes maintained a total of 15.6 million passengers in 2013, with Scottish routes performing best, served by ferry lines like CalMac, Northlink, and P&O Ferries, up 3.7% to nearly 6 million passengers, and Condor Ferries’ Channel Islands routes up 2.6% to 353,000.

The statistics
The 2013 Ferrystat Annual Figures are commissioned by Discover Ferries through independent research agency, IRN Research, and are collated by them from returns supplied by each of the ferry operator members of Discover Ferries.