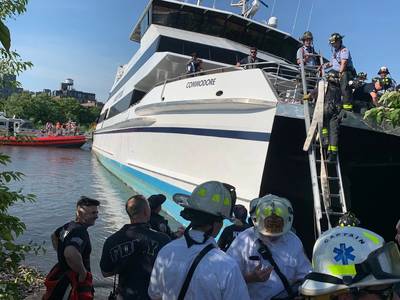 A ferry ran aground with 118 passengers and seven crew-members aboard in Brooklyn, N.Y., on Saturday evening.

Watchstanders at Coast Guard Sector New York command center received a report that the 150-foot Seastreak ferry Commodore ran aground and was taking on water in Bushwick Inlet near the Williamsburg section of Brooklyn, at approximately 4:17 p.m.

The ferry, which runs routes between New York and New Jersey, lost power and steering and began drifting before striking ground, operator Seastreak said. The vessel was traveling from Highlands, N.J., to East 35th Street in Manhattan. The Coast Guard said it is investigating the cause of the incident.

"The vessel drifted into Bushwick Inlet on the Brooklyn side of the East River and came to rest along the shore. The captain and crew were able to alert the passengers several times to be seated and hold on prior to the vessel going aground," Seastreak said.

There were no reported injuries to passengers, and one crew member was taken to the hospital for observation, not for injury from the grounding, but from what may have been heat exhaustion, Seastreak said.

The vessel was refloated and patches were applied to damaged sections of the hull while dewatering operations continued. On Sunday, it was towed to a nearby shipyard for repairs.

Capt. Zeita Merchant, commander of Coast Guard Sector New York, said, "The Coast Guard will now work with Seastreak on the investigation and inspection of the vessel to prevent similar incidents from occurring in the future."