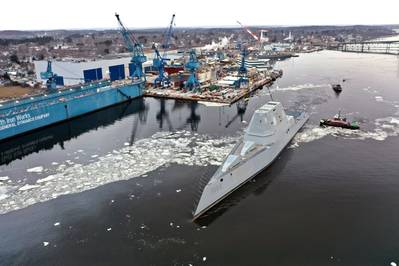 The third and final Zulmwalt-class destroyer built for the U.S. Navy sailed away from General Dynamics' Bath Iron Works (BIW) shipyard in Bath, Maine on Wednesday.

At 610 feet long with an 80.7-foot beam and 15,995 metric tons displacement, Zumwalt-class (DDG 1000) guided missile destroyers are the largest and most technologically advanced surface combatant in U.S. Navy fleet, designed to provide multi-mission offensive and defensive capabilities, including anti-air, anti-submarine and anti-surface warfare.

The ships feature a wave-piercing tumblehome hull design as well as a composite superstructure that significantly reduces radar cross section and other signatures, making the ship harder to detect by enemies at sea.

The Navy initially planned to operate 32 Zulmwalt-class destroyers, but the number was ultimately slashed to three due to cost overruns.