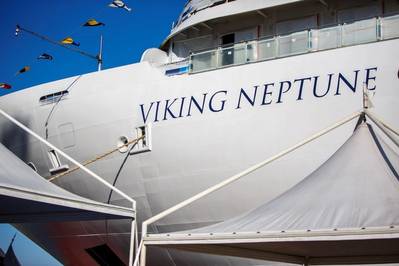 Italian shipbuilding group Fincantieri said Thursday it has floated out the newest ocean cruise ship it is building for shipowner Viking.

The new ship, Viking Neptune, was floated out at Fincantieri's Ancona shipyard. The vessel is the eight in a series of ships built for the small cruise ship segment. As its sister ships, she is about 47,800 tons, 465 cabins with accommodation for 930 passengers.

Viking Neptune has been designed by experienced naval architects and engineers, including an interior design team of London-based SMC Design, and Los Angeles-based Rottet Studios. In addition to the all-veranda staterooms, the ship has spacious suites with sweeping views, two pools, of which one infinity pool off the stern, abundant options for al fresco dining, and a spa designed according to the wellness philosophy of the Scandinavian tradition, with a sauna and a snow grotto.

Fincantieri started its partnership with Viking in 2012, trusting the shipowner who was entering the ocean cruise market as a start-up. Today, the cooperation which first began with an order for two ships, has reached a total of 20 units, including the order awarded to Vard for two expedition cruise ships, Viking Octantis and Viking Polaris, and the options.

Another nine units, options included, will take to the sea from the Fincantieri’s Italian yards in the next years.