Fincantieri to Adapt FREMM Frigate for US Navy 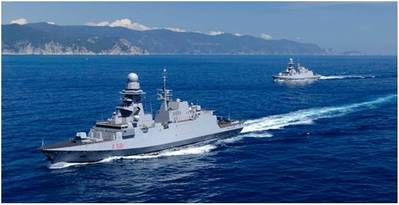 Fincantieri FREMM-FFG reference design vessel. Six of the 10 FREMM ships Fincantieri is constructing for the Italian Navy are in service. (Image: Fincantieri)

Shipbuilder Fincantieri Marine Group has announced further details on its plans to adapt its FREMM frigate, already in service for the Italian Navy since 2012, to design the U.S. Navy’s new guided-missile frigate, FFG(X).

Fincantieri said it will lead an industry team, including Gibbs & Cox and Trident Maritime Systems, to design and build the ships at its U.S. shipyards, including Fincantieri Marinette Marine (FMM) in Marinette, Wisc.
The FFG(X) design is based on FREMM, a multi-mission ship capable of conducting antisurface, antisubmarine and electronic warfare, as well as air defense operations. Fincantieri is building 10 FREMMs for the Italian Navy, six of which have been delivered.
Design partners Gibbs & Cox will help to modifying the FREMM hull, mechanical and electrical systems to U.S. Navy standards, while Trident Maritime Systems will serve as the Electric and Propulsion System Integrator with responsibility to design, specify and integrate these ship systems and components.
“We’ve assembled a world-class team of partners to customize to American design standards and deliver an advanced, flexible and highly reliable ship to the U.S. Navy for their current and future needs,” said Francesco Valente, president and CEO of Fincantieri Marine Group. “Our American shipyards are tailor-made for building small surface combatants and we have a strong, established and reliable U.S. supply chain.”