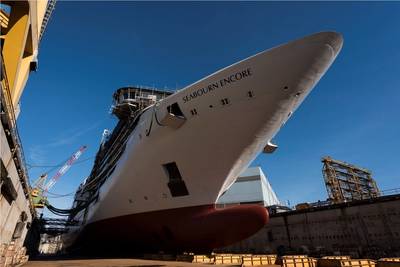 Fincantieri and the Grimaldi Group have signed a letter of intent for the cruise ship lengthening and transformation program "Cruise Rome" and "Cruise Barcelona" . The construction of the sections that will be inserted in the ships will begin in 2018, while the end of the operations is expected, at the Palermo plant, by the summer of 2019.

The two units, currently used on the daily route Civitavecchia-Porto Torres-Barcelona with the livery "Grimaldi Lines", were built by Fincantieri in the construction site of Castellammare di Stabia and delivered to the Neapolitan group respectively in 2007 and 2008. They are 225 meters long , have a tonnage of about 54,000 tons, and a transport capacity of about 3,000 people, with 2,400 m 2 of car deck and about 3,000 linear meters for heavy vehicles.
In the lengthening section, about 29 meters long, there will be about 600 linear meters for extra heavy goods, 80 beds in new passenger cabins, two armchairs with a total capacity of 450 seats and a new restaurant "Family self-service" ", Which will have about 270 seats. In addition, significant renovations of existing public areas will be carried out, including the creation of a thematic restaurant. Finally, the ship's safety equipment will be implemented to cope with the increase in passenger transport capacity.
At the end of the extension project, overseen by the Ship Repair and Conversion division of Fincantieri, each vessel will be about 254 meters long, will have a tonnage of about 63,000 tons, will be able to accommodate 3,500 people, with 3,000 m 2 of car deck and over 3,700 linear meters for heavy vehicles .
Technological aspects include the adoption of cutting-edge solutions aimed at reducing environmental impact and energy saving, such as the installation of scrubbers for the purification of exhaust gases and a system of mega lithium batteries to power the ship during stops in ports without the need to put diesel generators into operation, thus achieving the objective promoted by the Grimaldi Group of zero emissions in port .
" The ambitious renewal and extension program of our two cruise ferries, Cruise Rome and Cruise Barcelona, ​​demonstrates the Grimaldi Group's ongoing commitment to excellence, innovation and respect for the environment ", said Emanuele Grimaldi , Chief Executive Officer of the Group . " We are very pleased to have strengthened the historic relationship of collaboration with Fincantieri, entrusting the contract to the yard in Palermo, which we appreciate the great capacity and professionalism of the workers, and thus contributing to create new jobs in a delicate moment for the South " concludes Emanuele Grimaldi .
The CEO of Fincantieri Giuseppe Bono said: " It is no coincidence that we have been called upon to work for the renovation of two high-tech ships built by us. In fact, thanks to the considerable experience accumulated in recent years by our shipyard in Palermo, which has established itself as a reference point worldwide for this kind of highly sophisticated operations, we have consolidated our leadership also in the field of repairs and transformations. Such references constitute the best way to reopen the collaboration with a prestigious shipowning group with whom we have worked long and successfully in the past, serving it for several of its brands ".