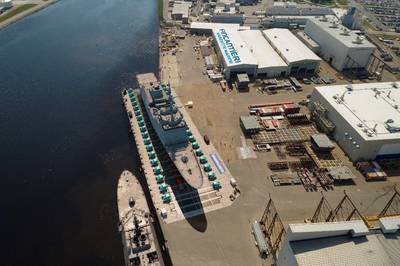 Fincantieri Marinette Marine is gearing up to build the recently named Constellation Class Frigates and other larger ships, having recently signed a contract with Pearlson Shiplift Corp. to design and build a state-of-the-art shiplift system in the Marinette, Wis. naval shipyard.

Scheduled to be completed in 2022, the shiplift will give FMM the capability to launch and retrieve larger vessels that will be produced in the shipyard. This more controlled and gentle launch method allows future ships, like the Multi-Mission Surface Combatant (MMSC) and Constellation Class Frigates to be outfitted to near completion and tested inside climate-controlled facilities before being launched into the adjacent Menominee River.

Pearlson said the approximately 500 ft. long and 82 ft. wide shiplift system will be the largest in the United States, capable of handling vessels of nearly 10,000 tons.

This multi-million dollar project, as well as additional capital expenditures are part of FMM's wider shipyard modernization and expansion efforts in support of the FFG(X) program and vessels larger than the Littoral Combat Ships currently being built there.

“The shiplift is one of our most important infrastructure projects,” said Dario Deste, President and CEO of Fincantieri Marine Group. “We are impressed with Pearlson’s capabilities and record of performance. They are an innovative American company who has pioneered the shiplift.”

The shipbuilder said it selected Pearlson Shiplift Corp, a Miami-based company with a recognized technical team with over 60 years of experience in design, engineering and development of shiplift and transfer systems, for this critical project.

Bryan Fraind, Vice President and COO of Pearlson Shiplift Corp., said, “This strategic investment by FMM will mean that current and future generations, both in Wisconsin, and the U.S will benefit from a world-class facility which is capable of handling the next generation of U.S. Navy warships.”