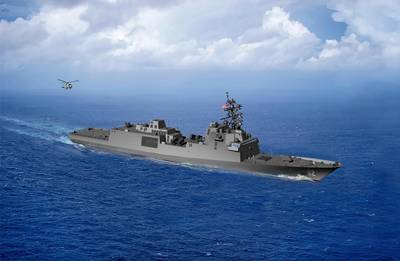 Fincantieri Marinette Marine shipyard has been selected to build a class of up to 10 multimission guided-missile frigates (FFGs) for the Navy’s FFG(X) program, the U.S. Navy announced on Thursday.

The Navy awarded a $795 million contract to the Marinette, Wis. shipbuilder for the design and production of one base ship plus nine option vessels, as well as post-delivery availability support, engineering and class services, crew familiarization, training equipment and provisioned item orders, which would be worth $5.5 billion if exercised.

“The Navy’s Guided-Missile Frigate (FFG(X)) will be an important part of our future fleet,” said Chief of Naval Operations, Adm. Mike Gilday. “FFG(X) is the evolution of the Navy’s Small Surface Combatant with increased lethality, survivability, and improved capability to support the National Defense Strategy across the full range of military operations. It will no doubt help us conduct distributed maritime operations more effectively, and improve our ability to fight both in contested blue-water and littoral environments.”

“I am very proud of the hard work from the requirements, acquisition, and shipbuilder teams that participated in the full and open competition, enabling the Navy to make this important decision today,” said James Geurts, assistant secretary of the Navy for research, development and acquisition. “Throughout this process, the government team and our industry partners have all executed with a sense of urgency and discipline, delivering this contract award three months ahead of schedule. The team’s intense focus on cost, acquisition, and technical rigor, enabled the government to deliver the best value for our taxpayers as we deliver a highly capable next generation Frigate to our Warfighters.”

The acquisition process for FFG(X) began in 2017. Since then the Navy has worked closely with Industry to balance cost and capability. This approach was successful in achieving an Average Follow ship cost across ships 2 – 20 that is below the objective set in the CDD and aligns to the National Defense Strategy’s stated goal of achieving a more lethal, resilient, and agile force by pursuing acquisition strategies to build ships more quickly and affordably. For example, because the Frigate acquisition program promoted shipbuilding competition, included early industry involvement, and open communication between all stakeholders the program was able to accelerate almost 6 years as compared to normal shipbuilding programs.

“When we began this journey nearly two years ago it was with the belief that there was a place for new ideas, new platforms and new partners in an already talented U.S. shipbuilding industry,” said Fincantieri Marine Group CEO Dario Deste. “Today’s announcement validates that thinking.”

The Navy plans to build 20 ships as part of the future frigate program. Fincantieri will build an adapted variant of the Italian FREMM (European multi-purpose frigate) in Wisconsin at its Marinette shipyard.

“Congratulations to the Navy on this important decision,” added Deste. “The men and women of Fincantieri Marinette Marine and our partner suppliers throughout the United States are ready to get to work.”

“I take great pride in representing Wisconsin’s shipbuilding industry because our workers have helped sustain America’s security for generations, boasting a successful history of building ships for our nation’s defense,” said U.S. Senator Tammy Baldwin. “This is a big win for our Made in Wisconsin economy right now and it will support thousands of skilled workers at the Marinette Marine shipyard and bring an additional 1,000 jobs to Marinette as the Navy quickly moves forward with construction of the Frigate.”