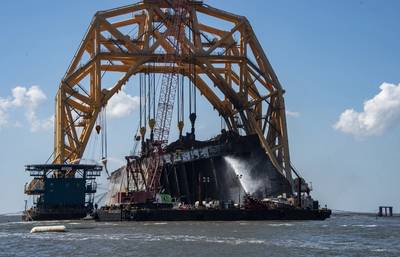 Engineers are assessing the condition of the Golden Ray wreck and salvage equipment after a fire ripped through the overturned and partially dismantled car carrier outside the Port of Brunswick, Ga. on Friday.

The fire broke out on Friday afternoon aboard the Korean-owned Golden Ray, which has been aground on its side in the St. Simons Sound outside the nation's second largest car carrier port since it capsized shortly after departing the Port of Brunswick in September 2019.

Shortly after the fire began, all nonessential personnel evacuated the specialized crane vessel VB-10000 that is being used to cut and lift the Golden Ray. All wreck removal personnel are accounted for, and no injuries were sustained. The Port of Brunswick remains open to vessel traffic.

The salvors had been conducting pre-cutting operations using 6-foot cutting torches and were actively using fire suppression systems as a preventative measure when the fire began and smoke began emanating from the ship.

The blaze is the latest in string of setbacks for one of the most complex salvage projects in U.S. history. Teams have already encountered delays relating to difficult environmental conditions, a COVID-19 outbreak among crew, mooring system adjustments for the VB 10,000 and a broken cutting chain.

“Fires are an unfortunate possibility given the dangerous conditions inside the wreck,” said Incident commander Chris Graff of Gallagher Marine Systems. “Despite the extreme environmental conditions around the wreck, our personnel continue to safeguard the environment through our comprehensive monitoring and mitigation procedures on the water and at the shoreline.”

In addition to a fire watch, response on-water pollution mitigation personnel will continue their routine 24-hour watch around the wreck site closely monitoring for any potential debris or oil impacts. Safety personnel continue to conduct mobile air monitoring on the water and at sensitive areas in the community. The response environmental unit will conduct additional water sampling to measure for any impacts to water quality. Previous water sampling analyses have not detected any exceedances of water quality standards.

“Throughout the fire, our safety personnel did not detect any exceedance of air quality standards during their community monitoring using mobile air monitors,” said State on-scene coordinator John Maddox of the Georgia Department of Natural Resources, Environmental Protection Division.

The VB-10000 unhooked from Section Three on Saturday and has shifted away from the wreck to allow for continued assessments for any damage sustained by the vessel and wreck removal equipment during the fire. The assessment is likely to take several days.

“Once we are able to access the site safely, we will conduct a thorough analysis of the structural integrity of the wreck as well as all wreck removal equipment,” said Matt Cooke of T&T Salvage.

The 150-yard safety zone around the environmental protection barrier (EPB) has been increased to 200 yards for recreational vessels as survey teams continue to assess the shoreline to find and remove any debris or other environmental impacts. 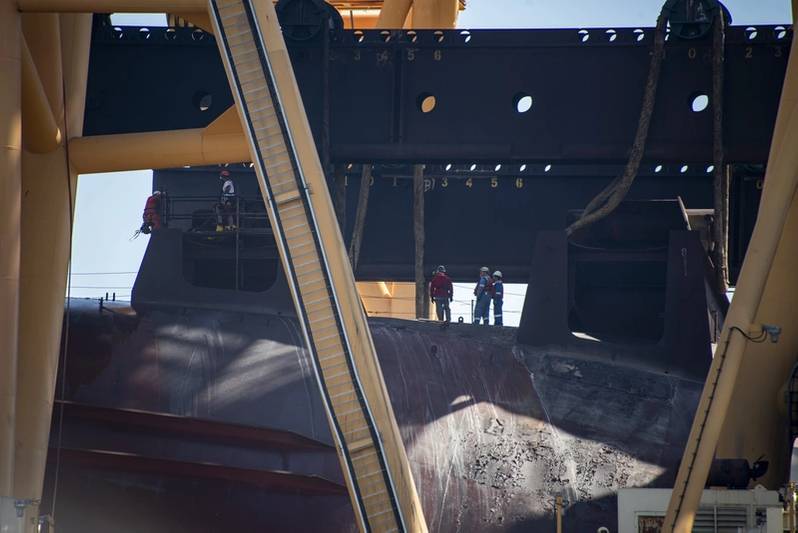