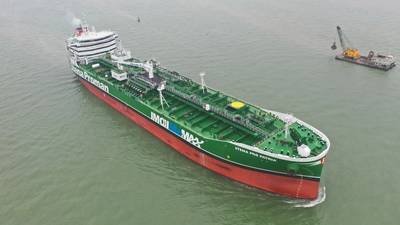 Guangzhou Shipyard International  (GSI) has started sea trials of the Stena Pro Patria, the first methanol-powered dual-fuel tanker constructed in China in what has been described as a 'watershed moment' in the development of methanol as an alternative fuel for medium-range tankers.

GSI signed the deal to build three 49,990 dual-fuel DWT tankers with Proman Stena Bulk, a joint venture between Sweden-based Stena Bulk AB and Switzerland headquartered Proman in 2019. Stena Pro Marine and Stena Prosperous, the other two ships currently under construction, are due to complete this year.

GSI further confirmed it was extending the deal to build three additional ships to the same design.

GSI vice president William Zhou hailed the start of sea trials and testing of the propulsion equipment as ‘a watershed moment’ in the development of methanol as an alternative fuel for MR tankers. He said each tanker will significantly cut NOx emissions by using around 12,500 tons of methanol as marine fuel a year powered by a MAN dual-fuel 6G50ME C9.6 engine, without catalyst conversion.

"We are very proud to see the first ship in this ground-breaking fleet begin sea trials,” Zhou said. “We won the contract under stiff competition from Korea and this ship shows what GSI is truly capable of building on our experience of building 30 dual-fuel vessels.

"The construction of the Stena Pro Patria is a massive achievement for all parties involved and I would like to thank Proman, Stena, our team, MAN engines as well as the class society DNV for all they are doing to make this bold ship design and fleet a reality. GSI is absolutely committed to leading innovation in alternative fuelled ships and these ships can go a long way in showing how methanol can be deployed safely and at relatively low cost.”

He also said he sees a big future for methanol as it is no more dangerous than diesel and is less hazardous to the environment than diesel or HFO biodegrading rapidly in the event of a spill.

“Methanol has the benefit of being widely available already near many ports worldwide having been shipped for decades,” he said. “Moreover, bunkering of methanol, as an ambient temperature liquid fuel, is similar to distillate fuel so can be used in existing bunkering facilities with relatively few upgrades.

"Methanol as a result is logistically cheaper to move around ports today than other low temperature cryogenic alternative fuels like ammonia, bio methane and hydrogen, though those fuels will have their place in the future and GSI is working on developing these technologies having secured AIP from class societies. But methanol provides a solution now and we want to share this breakthrough and help more owners and operators on the journey to meeting the IMO 2050 GHG targets.”

Decarbonizing Maritime: Challenge of our generation 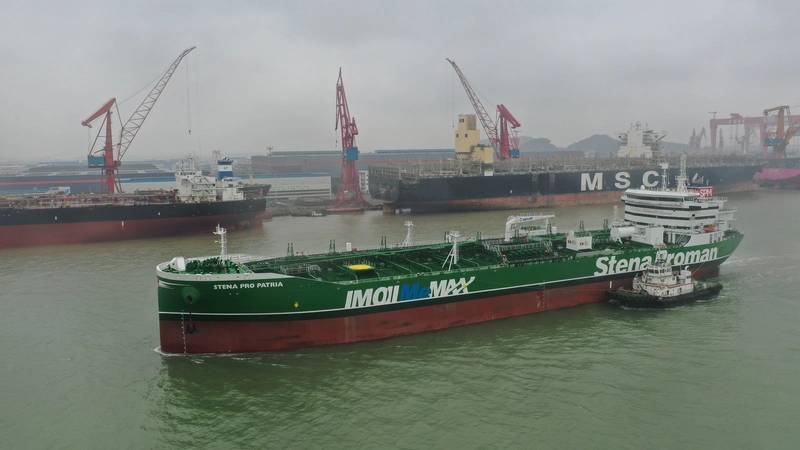 Zhou said the eco-friendly Stena Pro Patria and her sister ships further underline GSI’s drive to be one of the world’s greenest shipyards.

“Decarbonising maritime is the challenge of our generation and GSI is doing all it can to develop the latest thinking and technology,” he said. “GSI has a clear sustainability strategy with the twin aim of building greener ships and being a greener shipyard. We are delivering this by pioneering a range of dual-fuel technologies and we have delivered a large number of vessels equipped with Exhaust Gas Cleaning Systems.

"On the shipyard front, we are making changes to how we operate which saw us awarded Green Shipyard status by Guangzhou Local Government in 2021. This followed an evaluation of emissions and waste treatment after we invested heavily in new infrastructures such as better sewage and rust treatment systems as well as vapour organic collection and industrial garbage treatment systems and bucket recycling of coating material.

"We also hit the Zero Waste Factory Standard after cutting 2,000 tonnes of the industrial waste in 2020. We further invested in new control systems for steel cutting and paint air pollution which enabled us to meet the Shipbuilding Air Emission Control Standard.”