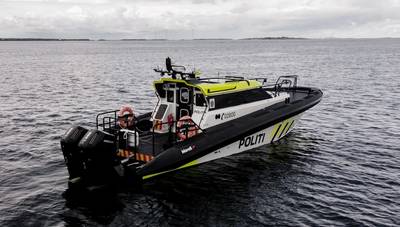 The multipurpose fast patrolling and interceptor vessels will be delivered through the first quarter 2023, entering operations at five different locations along the coastline in southern Norway.

The medium-sized, aluminum-hulled patrol boats will be used for patrolling and assignments such as surveillance, search and rescue, boarding and control of recreational boats. It will also be used as a training platform of police personnel in boat handling and navigation. Each boat will be able to carry up to 10 people and operational equipment.

The combination of the central helm station with an almost absent planing threshold, provides the helmsman with full control and good visibility 360 degrees at all speeds and in all conditions, the builder said.

The wheelhouse provides space for two crew members at the front, seated in Ullman suspension chairs, and for eight passengers seated in jockey seats behind. In the front of the cabin there is a seating area with toilet and a small pantry. The boat has a wide beam, which allows easy passage on both sides of the wheelhouse, from bow to stern. The low aft deck is particularly suitable for divers, drones, and life rafts while also being an effective platform for hoisting and retrieving injured people.

The canopy is made of vacuum molded GRP to reduce weight and noise, and to insulate the crew area from the effects from both cold and warm weather. The novelty of this design approach makes the craft suitable for both arctic and tropical conditions.

These M12 RIBs will be equipped with a twin engine set-up including the new Mercury 600HP V12 Verado engines, providing high propulsion efficiency over the whole speed range. The engine set-up will produce high-speed performance above 55 knots.