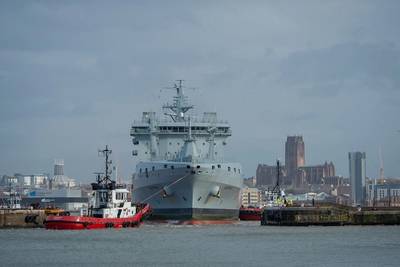 British shipbuilding company Cammell Laird has welcomed the first Royal Fleet Auxiliary (RFA) vessel, RFA Tidespring, to its Birkenhead shipyard as part its GBP619mln deal to maintain nine vessels over the next 10 years.

At the same time the company was awarded a second 10-year contract that will see it continue to provide support for the vessels RFA Fort Victoria, RFA Fort Austin, RFA Fort Rosalie, RFA Wave Knight and RFA Wave Ruler, which it has done since 2008.

Cammell Laird said winning the contracts will sustain more than 300 jobs at the company and across its supply chain, and create more than 100 apprenticeships.

RFA Tiderspring, which entered service in 2017 and is first in her class and her refit package will be carried out over the next four months involving survey work, and general repair and maintenance projects.

Tide class tankers are the newest addition to the RFA Flotilla, designed to supply the Royal Navy’s warships, including the two new Queen Elizabeth class aircraft carriers, with fuel and water while deployed on operations. They are as long as three jumbo jets lined up nose-to-tail, and can carry 19,000 metres cubed of fuel and 1,300 metres cubed of fresh water.

David Farmer, Head of Commercially Supported Shipping at Defence Equipment and Support, the MOD’s procurement organisation, said: “The arrival of RFA Tidespring at Birkenhead signals the culmination of an extremely successful first 15 months at sea. Her initial deployments, including those alongside HMS Queen Elizabeth, have been marked by very positive feedback from RFA personnel – indeed, satisfaction with the Tide class has been growing appreciably since she entered service.

“With support for the class underway through the Future In Service Support agreement we now look forward to Tidesurge and Tideforce, the final two ships in the fleet, entering service in the coming months.”