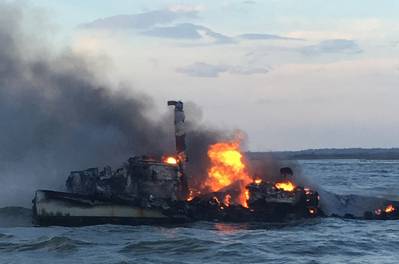 U.S. Coast Guard Sector Charleston command center watchstanders received a call from the fishing vessel at 3:16 p.m. stating their vessel was on fire and sinking. A Coast Guard Station Tybee Island 29-foot Response Boat - Small boatcrew and an Air Station Savannah MH-65 Dolphin helicopter aircrew launched at approximately 3:25 p.m.
The Dolphin crew arrived on scene at 4:30 p.m., hoisted the fishermen and transported to Air Station Savannah where EMS were waiting.
There were no reported injuries.
Coast Guard pollution investigators are on scene to assess the area for debris and pollution.
The cause of the fire is under investigation.