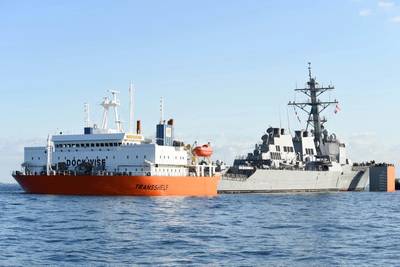 U.S. Navy warship USS Fitzgerald, which suffered heavy damage and nearly sank off the coast of Japan after a fatal collision with a Philippine containership in June, has returned to Fleet Activities (FLEACT) Yokosuka to repair further damage received while aboard heavy lift transport vessel Transshelf.
The Arleigh Burke-class guided missile destroyer USS Fitzgerald (DDG 62) suffered two punctures in her hull caused by the heavy lift vessel's steel support structure during on load at anchorage, the Navy said.
According to the Navy, repairs are expected to extend the on load process by a few days, after which Transshelf will transport Fitzgerald to Huntington Ingalls Industries (HII) in Pascagoula, Miss. for further repairs and upgrades.
On June 17, Fitzgerald was damaged on her starboard side above and below the waterline during a collision with the Philippine-flagged containership ACX Crystal that killed seven U.S. Navy Sailors.