Floating Oil Storage Stacks up in the Singapore Strait 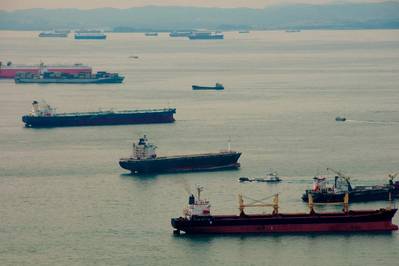 The number of tankers used for storing fuel oil along the Singapore Strait has risen since the Ukraine war broke out and could rise further as more of Russia's supplies hit by sanctions head to Asia, industry sources and analysts said.

A rise in floating storage supply along the strategic waterway is an indicator that more supplies are available to Asia, which will help ease tight markets. But, at the same time, it could limit a recovery in spot fuel oil prices for the year and weigh on Asian refining profits for the grade.

Earlier this month, the European Union said it may ban the import and transit of some fuel oil from Russia from Aug. 10, around six months ahead of a planned deadline. Read full story

The number of vessels used for storing fuel oil in the Singapore Strait totalled 18 to 20 by July versus 14 to 16 in the first quarter of the year, according to oil analytics firm Kpler.

"There is the potential for more floaters to arrive in the Strait as increasingly shunned Russian fuel oil will likely be backed into the East of Suez," said Jane Xie, a senior oil analyst at Kpler.

The 113 km-long (70 mile) long strait to the south of Singapore is situated between the Strait of Malacca and the South China Sea.

More Russian fuel oil has been flowing into Fujairah since May, with some of these barrels likely to be re-exported, Refinitiv ship-tracking data showed.

Fujairah is expected to receive more than 2 million tonnes of fuel oil from Russia so far this year, surpassing 1.7 million tonnes in 2021, Refinitiv data showed.