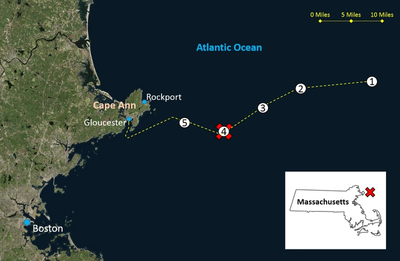 The December 2015 sinking of fishing vessel Orin C and fatality of a mariner on board were cause by structural failure of the vessel’s hull and subsequent flooding, according to a marine accident brief released by the National Transportation Safety Board (NTSB).

After suffering an engine failure off the Massachusetts coast on December 3, 2015, the 51-foot Orin C was taken in tow by a Good Samaritan fishing vessel, the Foxy Lady. While in tow under adverse conditions, the Orin C sustained damage from a large wave, and the damage contributed to the flooding on the vessel. Seas of 5 to 8 feet and winds of 20 to 25 knots battered the Orin C while it was in tow.
A Coast Guard motor lifeboat was then dispatched to assist and took the Orin C in tow as the waves grew to 8 to 10 feet and winds exceeded 30 knots. Dewatering efforts could not keep pace with the rate of flooding and the decision was made to abandon the Orin C. All three Orin C crewmembers entered the water; two safely swam to the awaiting Coast Guard lifeboat, the captain required rescue by a Coast Guard crewmember. The captain had no pulse and was not breathing when brought aboard the motor lifeboat. The lifeboat crew immediately began CPR.
A Coast Guard helicopter was dispatched to assist and attempts to lower a rescue swimmer to the motor lifeboat with an automated external defibrillator and emergency medical technician kit were unsuccessful. It was determined there was too much risk to continue those attempts due to the sea conditions.
CPR continued for more than an hour until a Coast Guard flight surgeon recommended ceasing resuscitation efforts. The Orin C’s captain was transferred to emergency medical services in Gloucester, Mass., where he was pronounced dead.
The vessel sank in about 300 feet of water, approximately 13 nautical miles east of Cape Ann, Mass.
The NTSB has made two recommendations to the U.S. Coast Guard in the marine accident brief regarding the emergency medical qualifications of response boat crewmembers and the type of emergency medical equipment carried aboard Coast Guard response vessels.