Flurry of US Crude Export Fixtures Offers Slimmer of Hope 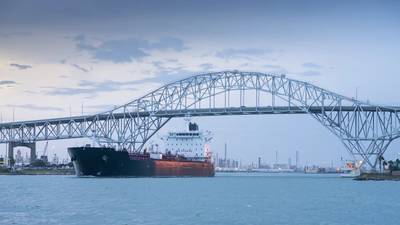 A flurry of tentative bookings to export U.S. crude oil from the Gulf Coast suggests demand is edging up after the coronavirus slammed energy consumption worldwide.

BP, Trafigura and Equinor have all tentatively fixed vessels this past week to carry U.S. crude to global destinations over the coming month, according to Refinitiv Eikon data and shipping sources.

Commodities merchant Trafigura and Occidental Petroleum are among companies looking to book vessels to ship crude from the U.S. Gulf Coast to Asia, one shipbroker said. The U.S. Gulf export market was particularly active last week, with around six ships confirmed with June loading dates, another shipping source said.

While U.S. crude's discount to Brent is still narrow, freight rates for supertankers from the U.S. Gulf to Singapore plunged more than 80% from early April to the lowest since August 2019 this month, Refinitiv Eikon data showed. Those rates are currently near $5.75 million after peaking around $20 million in late March, sources said.

"Vessel freight rates have been coming down over the last couple of weeks which is re-igniting interest in export opportunities," said Andy Lipow, president of consultants Lipow Oil Associates. He said demand in China and India is expected to keep rising as the countries contain the spread of COVID-19.