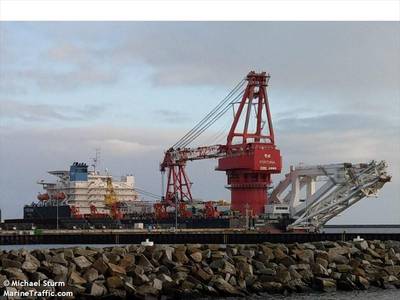 The Russian pipe-laying vessel Fortuna has left the Nord Stream 2 gas pipeline construction site in the Baltic Sea, Refinitiv Eikon data showed on Monday, indicating that the 2.6-km stretch of the project in German waters may have been completed.

Fortuna was now heading for the north German port of Wismar, the data showed.

The Fortuna earlier this month resumed work on the pipeline, which will pump gas directly from Russia to western Europe, bypassing Ukraine. Work had been suspended for a year due to the risks of sanctions from the United States.

Nord Stream-2 did not respond to a request for comment on Monday on the latest developments.

The pipeline, which is estimated to cost 9.5 billion euros ($11.6 billion), will make western Europe more dependent on Russian gas and Washington says it will compromise European energy security. It has become a flashpoint in relations between Russia and the West, which have sunk to post-Cold War lows. The Kremlin has called the sanctions "unfair competition".

The Fortuna is meant to continue construction of the pipeline in Danish waters next month.

The consortium building the pipeline, led by Russian gas giant Gazprom with Western partners, has still to lay more than 100-km of pipeline, although more than 90% of the project has been completed.

Senior U.S. administration officials said last Wednesday that Washington was urging European allies and private companies to halt work that could help build the pipeline and was preparing wider sanctions on the project in coming weeks.

The Kremlin said last Thursday that new U.S. sanctions targeting Nord Stream 2 could complicate the completion of the pipeline, but that Moscow and European nations had an interest in it being built.