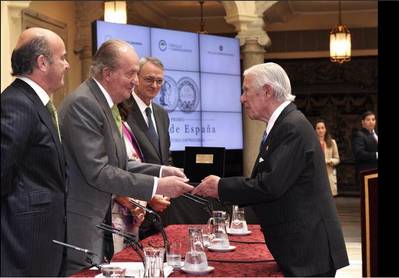 To commemorate the award, Enrique de Sendagorta was presented with a reproduction of a medal of honor dating back to 1764, the days of King Charles III of Spain. In his acceptance speech, the SENER’s founder spoke of the ideas that have served as the basis for his entire business career, saying that “The first necessity is to add value and create wealth, and coupled with that, the need to improve and elevate people in the company and to contribute to the social good. The complementary outcome is to ensure the permanence of the company in the long term, that is, "build to last", and an obligatory condition for this is matching the intellect of the workforce to entrepreneurial action, in other words, knowledge.” He also referred to humanism as a value linked to the service mentality, which is a key concept. “It is vital to ensure that everyone exercises their value and knowledge, with confidence and free of excessive self-interest, so as to open the channels of honor and care that are in all of us, being necessities of the human soul and a major motivating force. With people who serve under a united purpose, and with the flexibility that the satisfaction brought by being a fitting part of the outcome, we will have companies that are better than great, and proceeds that enable us to build a future for those that follow.” Enrique de Sendagorta also expressed his gratitude to his “esteemed friends and fellow entrepreneurs for standing by His Majesty the King in the effort to lay out new paths and mobilize our society, which is so in need of initiatives, innovative work and tranquility.”

The Kingdom of Spain Entrepreneurial Career Award was founded by the Entrepreneur Society, the Economy Society and the Basque Entrepreneur Society to recognize a lifetime achievement in the business world marked job creation, innovation, internationalization and social cooperation. Enrique de Sendagorta was selected for the prize in its very first year, 2014. In the words of the president of the jury panel, Marcelino Oreja, “As with any great businessman, Enrique de Sendagorta’s professional career is an example of what intuitions, hard work, generosity and sacrifice can do for the future of a company and for the prosperity of Spain when they are matched with a vocation for service.”

This recognition is the latest in a string of awards honoring the career of this businessman. Prior to this award, Enrique de Sendagorta was presented with an Honorary Member medal from the Spanish Institute of Engineering. He has also received the National Lifetime Innovation Award from the Ministry of Science and Innovation (2011), the Ingenia Prize from the Bilbao School of Engineering (2004) and the Association of Marine Engineers Award for Professional and Social Lifetime Achievement (1999). He has also been decorated with the Grand Cross of Naval Merit in Spain, the Star of the Grand Officer’s Cross in Germany and the Southern Cross in Brazil.