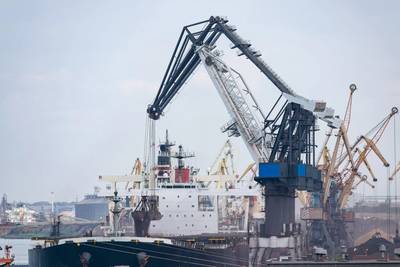 A fleet of four LNG dual-fuel Tier III 190,000 DWT bulk carriers measuring 299 by 47.5 meters each will be built by Shanghai Waigaoqiao Shipbuilding (SWS) to support the charter. The new ships are expected to be delivered through 2023.

The ships will be fitted with MAN Energy Solutions’ high-pressure ME-GI engines. To further increase fuel efficiency, U-Ming will be investing and installing other energy-saving devices such as a Mewis duct, propeller boss fin and alpha lubricator. The new vessels will also be equipped with U-Ming’ proprietary Fleet Safety Management (FSM) and Fleet Performance Management (FPM) systems supported by its Operation Center, enabling near real-time speed, weather and route optimization updates.

Bulk market outlook
With a sharp decrease in Chinese steel production, power and coal consumptions in the first half of the year, the average Baltic Dry Index (BDI) had decreased 23% to only 685 points, from 895 points in the same period of 2019.

The bulk market has gradually recovered somewhat since May, and the freight indices of various vessel types have rebounded. The US-China trade war has been beneficial to Brazilian soybeans farmers and contributed to the uptick in demand from China at the end of May.

China also began restocking its iron ore supplies in May, supported by the government’s infrastructure stimulus plan to combat the pandemic-induced recession.