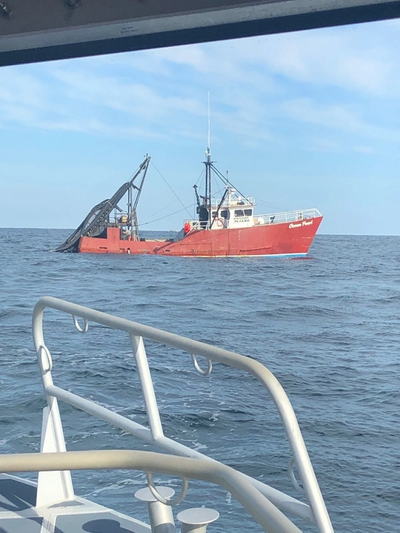 The U.S. Coast Guard rescued four people from a life raft after a commercial fishing vessel caught fire about 16 miles southeast of Cape May, N.J., Saturday morning. No injuries were reported.

Two Coast Guard 45-foot Response Boat-Medium crews from Station Cape May and the crew of Cutter Crocodile, an 87-foot patrol boat homeported in Cape May, launched to assist.

When the Coast Guard crews arrived on scene, they found the four men dressed in survival suits aboard the life raft. One of the RB-M crews took the men aboard and brought them ashore.

The Ocean Pearl’s owner is coordinating the salvage of the vessel, which is adrift near the mouth of the Delaware Bay. Cutter Crocodile’s crew is remaining on scene to monitor the salvage.

“In the winter, the marine environment is rougher and colder,” said David Umberger, command duty officer at the Sector Delaware Bay command center. "This case might not have had such a good outcome if the captain and crew of the Ocean Pearl hadn't been prepared for an emergency. Keeping a properly-registered EPIRB, well-maintained cold-water survival gear and functioning communications equipment on board your vessel will save your life."