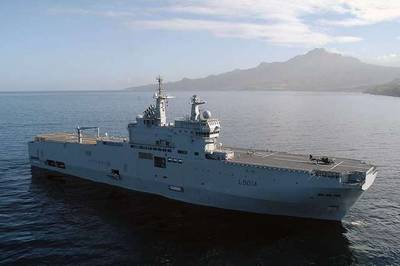 France will use a helicopter warship to transfer coronavirus patients in critical condition from Corsica to hospitals in the southeast of the country, its armed forces minister said on Friday.

As of Thursday, there were 162 confirmed coronavirus cases on the Mediterranean island. The last official breakdown, on March 15, showed six deaths and six people in intensive care.

"Following a decision from the president, the Tonnerre helicopter carrier will soon dock to evacuate patients in intensive to health facilities that can take care of them," Florence Parly, the armed forces minister, said on Twitter.

French authorities are trying to anticipate a sharp rise in cases to relieve stress on areas that have fewer units by moving patients to bigger hospitals.

Earlier this week patients were moved by military plane from eastern France to hospitals in Marseille and Toulon.

"This measure aims to support the intensive care unit at Ajaccio hospital to anticipate the hospital's response to the needs of the mostly seriously hit patients," the south Corsica police said in a statement.

It said the warship would arrive over the weekend and would transfer patients to southern France.

The warship has 69 beds on board, according to the navy website.

Regional police chief Franck Robine told France Bleu they were expecting to move between 12 to 15 patients.

"We fear an increase in the number of cases and a wave of patients who will need to be looked after in intensive care towards the end of the weekend and start of next week," he said.