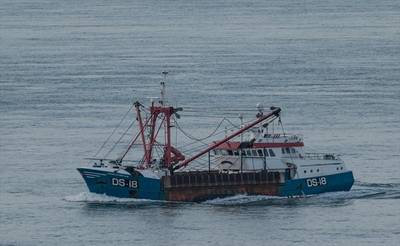 A French court ruled on Wednesday that a British trawler impounded by French authorities could sail for home, overturning an earlier demand that its captain pay a 150,000 euro ($174,000) bond, a lawyer for the captain told Reuters.

The Cornelis Gert Jan was seized last week, with French authorities saying it had been caught fishing for scallops in French territorial waters without a proper license.

The lawyer for the Irish captain, Jondy Ward, said earlier the vessel was a pawn in a wider political row between Paris and London over fishing rights after Britain's departure from the European Union. read more

Ship tracking website marinetraffic.com showed the vessel was still moored on Wednesday evening in the French port of Le Havre, where it was impounded. Its declared destination was listed on the site as "FREEDOMMMM".

"We are obviously delighted and relieved that the vessel can leave and our crew can get home," Andrew Brown, a director of the trawler, told Reuters.

"We are also very pleased the courts have not set any bond for the release of the vessel. We are just relieved that the crew, who remain in good spirits, are able to head home," he said.

The French authorities had initially demanded the 150,000 euro bond in exchange for allowing the captain and the vessel to leave French jurisdiction pending a trial which has been scheduled for next year.

France and Britain this week came to the brink of a cross-Channel trade war, with Paris alleging that London was denying fishing licences to French trawlers they were entitled to under a post-Brexit deal.

Britain said it was honoring the deal, and accused France of blowing the affair up out of all proportion. Paris had threatened to step up checks on trucks and produce arriving from Britain and to bar British trawlers docking in French ports.

But France pulled back at the last minute and now says it will make a fresh attempt to negotiate a solution with Britain. Senior British and French officials are to meet for talks on the issue on Thursday.