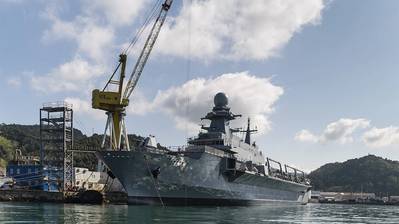 France and Italy forged a military shipbuilding alliance on Friday, as state-controlled Naval Group and Fincantieri signed off on a 50-50 joint venture that will bid for Franco-Italian warship projects and sell to the world market.

The alliance reflects the two countries' desire to fend off competition in naval shipbuilding from the likes of China, the United States and Russia.

It is targeting orders worth up to 5 billion euros ($5.63 billion) over the next decade. Naval Group said the joint venture aims to build 10-15 warships in that period, with synergies estimated at 10-15%.

"It is the product of a shared industrial ambition," Herve Guillou, chief executive of Naval Group told reporters on a call.

"We are by far the two biggest naval shipbuilders in Europe, but we cannot remain competitive and maximize our resources if we rely only on our domestic markets."

The joint venture does not entail a share swap between the two groups.

However, political and business relations between the two euro zone powerhouses have become increasingly fraught since then and uncertainty hangs over other deals.

Earlier this month, Fiat Chrysler withdrew its proposal for a 35 billion euro merger with Renault, with both the Italian-American carmaker and Rome blaming French government interference for the deal's collapse.

Fincantieri top executives recently said they were confident of winning approval from Brussels, but that it could take some months.

The joint venture between Fincantieri and Naval Group, in which French defence company Thales has a 35% stake, seeks to balance power within the alliance.

That has been a stumbling block for other Franco-Italian mergers such as the troubled Essilor-Luxottica tie-up.

The new enterprise will be headquartered in Genoa, with its engineering centre based in France's southern Var region.

Its chief executive Claude Centofanti is a Frenchman and its chairman, Giuseppe Bono, an Italian who is also CEO of Fincantieri.

The two companies have said they will look for efficiencies by taking advantage of their bigger scale, jointly conducting some research and sharing test facilities.

Guillou said the market for mid-size to large frigates was growing 5-7% a year. "It's also where the emerging competition is attacking us the hardest," he added.

He said there was potential for Naval Group and the new JV to derive synergies too from the Fincantieri-Chantiers de l'Atlantique tie-up, but a go-ahead from Brussels would be needed before they can be more deeply explored.

But he added that the setting up of the venture and the merger between Fincantieri and Chantier were separate issues, downplaying analysts' hopes the JV could make it easier to win the go-ahead for Fincantieri-Chantier.

"We could imagine buying steel benefiting from scale of volume," Guillou said. "When you think about what vessels of the future might look like, and cleaner energies, it's not something that will only interest military shipbuilders."