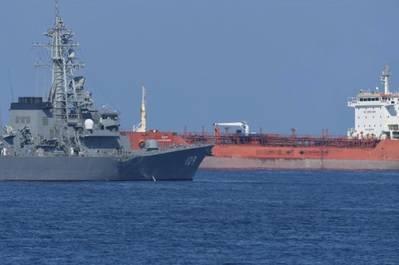 Two warships came to the aid of an injured seafarer on board the Indian-flagged merchant tanker Lourdes off the coast of Oman in the early hours on Monday.

French frigate Jean Bart and Japanese destroyer Ariake were called to conduct the emergency operation, which saw medical personnel from both vessels assist an Indian patient who had a suspected head injury.

At 0100Z (0400 local time), a Japanese medic provided immediate assistance on board MV Lourdes, before coordinating with the French warship to arrange a medical evacuation by Panther helicopter.

The two teams worked together to stabilize the patient, who was later evacuated to receive treatment at the Sultan Qaboos University Hospital in Oman.

The Japanese ship was conducting counter-piracy operations in the region at the time of the call, as part of Combined Maritime Forces’ (CMF) Combined Task Force 151 (CTF 151).

"This is the second incident in recent weeks that ships operating under CMF tasking have come to the aid of a merchant vessel,” said commander of CTF 151, Rear Admiral Nejat Inanir. “When the life of a fellow mariner at sea is in danger, our sailors will do their best to assist. The agility of our ships to switch tasking in order to help in this incident is commendable.”

Last month, while working in support of another CMF task force, CTF 150, the U.S. warship USS Winston S. Churchill was redirected to assist an Iranian-flagged motor vessel in distress.

CMF is a multinational maritime partnership which exists to counter illicit non-state actors on the high seas, promoting security, stability and prosperity in the Arabian Gulf, Red Sea, Gulf of Aden, Indian Ocean and Gulf of Oman. CTF 151 operates to deter, disrupt and suppress piracy and armed robbery at sea and to engage with regional and other partners to strengthen relevant capabilities in order to protect global maritime commerce and secure freedom of navigation. CTF 151 is currently led by the Turkish Navy, the sixth time that the country’s Navy has led the task force.