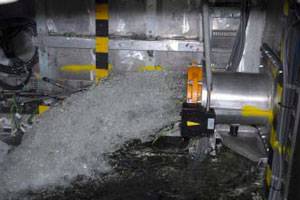 Napa Ltd is continuing its research into the physics of a flooding vessel; this effort is part of Ship Flooding, a national research project on progressive flooding and damage stability of ships being conducted in Finland. The other partners are the Finnish Naval Research Institute, Technical Research Center of Finland (VTT), Helsinki University of Technology (TKK) and STX Finland Cruise Ltd. The project is funded in part by Tekes (the Finnish Funding Agency for Technology and Innovation).

Several full-scale flooding tests were performed between August 30th and September 3rd 2009 using the Facturku, a decommissioned fast attack craft of the Finnish Navy. The length of the ship was about 147.6 ft and the displacement is roughly 220 tons. The tests were performed by the Finnish Naval Research Institute and the instrumentation was provided by VTT. The measurements included ship motions, the progression of the floodwater and air compression.

The main objectives of the project were:
• Improved knowledge of flooding mechanisms in full scale (flow characteristics, permeabilities, etc.)
• Air compression effects in a damaged tank
• Validation of the time-domain flooding simulation

Within the project, the Napa time-domain flooding simulation tool is extensively validated against the experimental results. This simulation tool has previously been validated against model test results, but these full-scale flooding tests will eliminate all scale effects that are known to be important, especially with regard to air compression in the flooded tanks. The results of the project will be published in scientific venues.