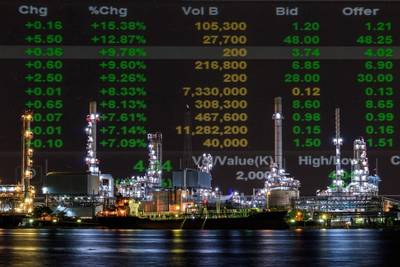 Hedge funds added more bullish positions in crude at the start of February but at a much slower pace than before, as optimism about OPEC output cuts was tempered by renewed anxiety about the U.S.-China trade talks.

Hedge funds and other money managers increased their net long position in Brent crude futures and options for the eighth time in the last nine weeks but by just 1 million barrels.

Funds added short positions at the fastest rate for nine weeks since the week ending Dec. 4 in a sign at least some managers think prices have peaked after the recent rally.

OPEC's aggressive output reductions and U.S. sanctions on Venezuela have removed significant volumes of crude from the market since the start of the year, boosting prices.

But doubts about progress in the U.S.-China trade talks and the outlook for the global economy have returned, with equity prices stalling and bond yields dropping, spilling across into concerns about oil consumption.

Funds remain more cautious on gasoil (with long positions outnumbering short ones by just 2.6:1) than on Brent (where the ratio was 4.8:1), reflecting concerns about the economy, but also suggesting more upside potential.

Position-building in gasoil is accelerating as funds anticipate new bunker fuel regulations likely to boost consumption of clean-burning gasoil at the expense of dirty fuel oil from the start of 2020.

Perhaps more immediately and importantly, U.S. sanctions on Venezuela are hitting the availability of medium and heavy-density crudes, which are particularly suited for making gasoil.

The same medium and heavy crude shortage that has pushed medium grades to a rare premium over their lighter counterparts may also be encouraging fund managers to turn a bit more bullish on diesel.

(John Kemp is a Reuters market analyst. The views expressed are his own)